What is nicotine withdrawal: symptoms, coping, and treatment

Quitting smoking is the best thing you can do for your health and vitality -- but it's sure not easy.

Many people swear that quitting smoking is one of the most difficult things in their lives. Although nicotine — the addictive substance found in tobacco — doesn’t produce an intense high like cocaine or heroin, it can be just as hard to quit as these dangerous illegal drugs. This is due to the strong physical and psychological withdrawal symptoms that begin immediately when nicotine starts to leave the body.

Nicotine withdrawal symptoms are experienced differently by each person, some feeling them more heavily than others. Generally speaking, withdrawal symptoms peak after 1-3 days and gradually decrease over a period of 3-4 weeks. After this time nicotine should be completely flushed out of the body. But, even after all this time, psychological effects may still linger.

Understanding the effects of nicotine withdrawal is essential for successful smoking cessation. Being aware of the real challenges involved in quitting smoking helps people mentally prepare and seek treatment.

Before we delve into more details about the symptoms of nicotine withdrawal, it’s helpful to understand why the substance is so addictive in the first place.

Your brain on nicotine 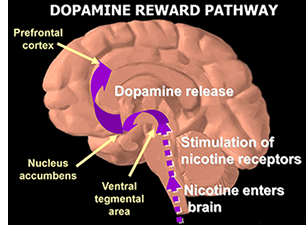 When an individual inhales tobacco smoke, nicotine — alongside thousands of chemical byproducts, many of which cause cellular damage, DNA changes, and cancer — is absorbed through the lining of the nose mouth, and lungs. From there, nicotine enters the bloodstream, eventually reaching the brain where it activates reward and pleasure circuits by boosting dopamine levels. Nicotine is also known to affect areas of the brain regulating breathing, memory, appetite, and heart rate.

The brain can quickly become addicted to this effect. A typical tobacco user smokes 20 cigarettes a day, and each cigarette offers more than a dozen nicotine hits. Over the years, the brain becomes primed for smoking by thousands of instances in which it is “rewarded” by the nicotine stimulation. This is one of the reasons why the psychological withdrawal symptoms of nicotine are so taxing — a user often associates smoking with all sorts of activities ranging from socializing with friends to waiting for the bus. For a heavy smoker, even leaving the house can be a trigger to smoke.

The symptoms of nicotine withdrawal

The itching cravings. When nicotinic receptors in the brain are suddenly deprived of nicotine, the release of the “feel-good” neurotransmitter dopamine also halts — and this is when the trouble starts, too. Only a few hours after your last smoke, you’ll notice an intense yearning for smoking — something to which the body has adapted and become tolerant to over the years. Nicotine cravings last for anything from 5 to 30 minutes and can be extremely uncomfortable, to say the least. The good news is that they eventually go away, fading and spiking in waves.

Snacking and constantly feeling hungry. The urge to eat more often and in larger quantities is a normal effect of quitting smoking. Nicotine triggers the release of glucose from the muscles and liver and alters your insulin response. In the absence of nicotine, the body experiences a drop in blood sugar, triggering an urge to consume carbs. Many turn to sweets during these sudden bouts of hunger — so you can see how easy it is to gain weight in these circumstances. It is normal for individuals who quit smoking to gain 10 pounds (4-5kg) on average during the first year of quiting smoking, with most of the gains seen in the first three smoking-free months.

Trouble sleeping. The sudden disruption of the dopamine system can lead to trouble sleeping, which can manifest itself in a spectrum of symptoms ranging from insomnia to needing more sleep during the day. According to studies, quitting smoking can disrupt rapid eye movement (REM), affecting the quality of sleep. A good idea is to perform relaxation exercises before bed and reduce your caffeine intake during the day.

Coughing. This might sound counterintuitive, but people who quit smoking tend to develop a persistent cough. This is actually a sign that your lungs and airways are healing. Our airways are lined by finger-like projections called cilia, which become flattened from smoking. When you quit, the cilia return to their normal shape and, in the process, expel deposits out of the lungs to be coughed up.

Mood swings and grumpiness. This is a tough symptom to bear not only for the would-be smokers but also for their friends and family. One of the first things you’ll notice in the first days of quitting smoking are feelings of heightened stress and irritation. Even the most trivial gestures can make you angry or trigger irrational outbursts. Unpredictable changes in mood come with the territory — they’re due to the dramatic changes in the body’s hormonal and central nervous systems. So, warn your friends you’ll not quite be yourself for the first few weeks of quitting smoking.

Fatigue. Remember, nicotine is a stimulant, so it’s normal for you to feel a lot more tired than usual. The stress and mental energy you expend when quitting smoking also add up to make you feel more tired. Generally, it takes two to four weeks for your energy levels to get back to normal. In the meantime, get some rest and exercise to improve these symptoms.

Memory problems and difficulty concentrating. Another side effect of the dysregulation of the dopamine system will be remembering recent events. You’ll also find it difficult to focus on tasks that would have otherwise been easy during the smoking life (nicotine actually enhances the ability to concentrate). Other psychological symptoms of smoking cessation include anxiety or depression, which, in extreme cases, may require medication.

Constipation. One in six smokers will experience bouts of constipation, which can last for one to two weeks. The sudden absence of cigarette smoke in the gut can alter the motility and contraction of the intestines, thereby slowing the rate at which food is digested. Constipation may also be exacerbated by the increased intake in food caused by the munchies that come with quitting. In order to reduce the risk of constipation, doctors recommend drinking plenty of water and including more fiber in your diet.

Here’s what you can expect from the moment you extinguish your last (and, hopefully, final) cigarette:

Quitting cold turkey will make nicotine withdrawal symptoms harsher than those who seek counseling and smoking cessation aids. In order to avoid relapsing, it’s a good idea to try treatments such as nicotine replacements. These are products that deliver doses of nicotine to the body without the harmful byproducts of tobacco smoke. These include chewing gum, skin patches, inhalators, tablets, and nasal or mouth sprays. E-cigarettes, which deliver nicotine as vapor, can also be a good alternative to smoking. However, the health risks of e-cigs are still understudied.

Nicotine replacement therapy (NRT) can reduce the chance of relapsing by up to 60%. The idea is to gradually reduce the nicotine dosage until a person is ready to stop permanently. However, people may experience side effects when using NRT, such as nausea, dizziness, insomnia, and headaches.

There are also medications that reduce cravings for smoking, such as varenicline (known as Chantix) and bupropion (known under the brand name Zyban).

Lastly, people shouldn’t be afraid to try counseling alongside NRT, in order to address the difficult psychological withdrawal symptoms.

Bottom line: Quitting smoking is highly challenging but the effort is well worth it. If there’s only one lifestyle choice you can make in order to dramatically improve your health and vitality, choose to quit smoking.