The surreal practice of honey hunting in Nepal

The life of a beekeeper is not an easy one, but for bee hunters, it’s an entirely different world. In case you don’t know what I’m talking about, bee hunting is an ancient art practiced by some Himalayan civilizations in one way or another in the past 10,000 years. It’s been done in 8,000 BC, it’s being done now… and it’s absolutely crazy.

You need a rope ladder, long spears, something to start a fire, and monumental will power. It’s a savage struggle, a fight for a valuable resource. Twice a year, high in the Nepalese Himalayan foothills, teams of men gather to go hunting. What are they hunting? The honey of the largest honeybee, the cliff bee, Apis laboriosa.

Apis laboriosa is over twice the size of regular honey bees, with single adults measuring up to 3 cm in length. It lives only in the Himalayas, in the mountainous regions of Bhutan, the Chinese province of Yunnan, India, and Nepal. It mostly nests at altitudes between 2,500 and 3,000 m (8,200 and 9,800 ft), building very large nests under overhangs on the south-western faces of vertical cliffs. A single next can contain huge quantities of honey – about 60 kg (130 lb) of honey – and this honey costs on average five times more than regular honey, not only due to its different taste, rarity and purported medicinal value, but due to intoxicating qualities. The bees collect nectar from a specific type of rhododendrons, which contains grayanotoxin.

The Gurung tribesmen of Nepal are especially well known as honey hunters. Gurungs, like Sherpa, are indigenous to Nepal’s mountain valleys. For the honey hunting operation, they rely on handmade rope ladders and long sticks known as tangos to poke and destroy the hives, which are placed on inaccessible cliffs facing south, for more sunlight and reduced predator access.

The whole thing usually lasts for three days and not a moment is wasted. Before a hunt can commence the honey hunters perform a ceremony to appease the cliff gods. The complex ceremony involves sacrificing a sheep, offering flowers, fruits and rice, and praying to the cliff gods to ensure a safe hunt – but a hunt is rarely safe.

A stranger in a strange land

Our knowledge of bee hunts would be much smaller if photographer Andrew Newey hadn’t embarked on such an expedition in December 2013. He braved two weeks with the Gurung people, and returned with an amazing story – and the pictures to back it up.

After the nets have been crafted, after the ceremony ended and everybody is prepared, it’s finally time to go. It’s a long walk, but the Gurung are experienced at finding the hives. After they do so, using little protective clothing, the hunters climb some 2-300 feet (60-90 meters) up a cliff. They make fires and use smoke to sedate and confuse the bees and they chisel away at the hives using the long bamboo sticks. Large baskets are place beneath to collect fallen honey. It’s a tiresome task, and a dangerous one. Many people are wounded, and sometimes, it can even be fatal, but most hunters have learned to ignore the tens or hundreds of bee stings. For the Gurung, it’s a part of their way of life.

“There’s a big team, and they see it as a sort of social event, a bit of a catch,” Newey says. “I can’t imagine how sore the cutter’s muscles must be.”

Indeed, it’s a monumental task for the one on the rope. Dazzled by the smoke, stung by bees, in a moment of silence and precision amidst all the chaos. Along with the honey, blood is always spilled as well – it’s one of the unavoidable hardships of this rugged way of life.

A fight, a reward

After it all ends, the villagers return home with something on the order of 20 kgs of honey. Although now there are a few specialized hunters who work for several villages, the whole thing still carries a religious load and is deeply embedded in local traditions.

The honey is divided between all villagers, and the first use is, of course, for tea. As for Newey, he was constantly asked how he found out about the hunt and when it is taking place. Hunters are careful about revealing their secrets because of the increasing damage that tourism is causing.

“Because these are responsible hunters they were concerned about their cliffs suffering from this unwanted tourist activity if the location was disclosed.”

As if this whole thing wasn’t dangerous enough, the Gurung, like many people inhabiting the Himalaya area are threatened by modern developments – especially tourism. Spring ‘Red’ honey is the most sought after, costing upwards of $US15 per kilogram, with perceived health benefits in Chinese, Korean and Japanese medicine – although I couldn’t find any evidence that this is superior to any other type of honey.

Ruthless so-called trekking agencies are cashing in a lot of money by buying off hunters to stage hunts at all times of year either to sell at market or just as a touristic attraction. This disturbs the local environment and bee populations and already starting to decline. The thing is, that even though brutal, the Gurung only took as much as they needed, while consumers from the “developed world” want more and more. The usual annual harvest used to be more almost 200 liters; when Newey went with them, they harvested less than 100. To make matters even worse, because there is so much commercial interest, the government is actually seizing property of the cliffs from the local populations, giving out harvesting rights to private contractors. As the number of bees drops, so does the number of bee hunters, and with the modernization of the area and so many jobs in tourism, kids aren’t really interested in pursuing this technique. Just as we were starting to learn about this tradition, so too it fades away.

“The Gurung tribes people used to own the cliffs,” Newey says. “But because there’s so much money now involved in exporting the honey, the government is trying to open up the sites to contractors, basically taking the land away from the Gurung people and offering it to contractors who are there to harvest as much honey as possible, and of course causing a decline in the bee population.”

But not everybody is against the Gurung: he International Center for Integrated Mountain Development (ICIMOD) is addressing problems arising from commercialization of honey hunting and the impact of tourism through the Himalayan Honeybees project. Their goal is to work sustainably alongside local populations to preserve their techniques  and ways of life. Another one of their main goals is to regulate bee hunting, so that only people with the right experience and knowledge are allowed to do it – and only a couple of times a year – thus limiting the number of harvests and protecting bee populations, while also ensuring real financial benefits for the villagers. In how things work now, the agencies make most of the money, while most locals barely scrap a living. 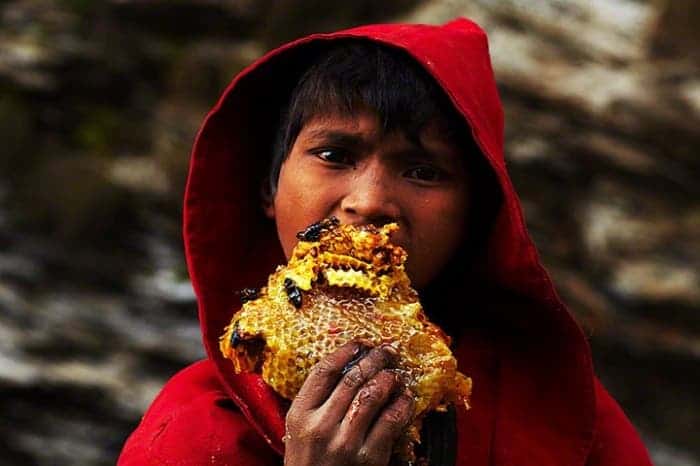 Saving the bees is also a larger environmental problem – bees are among the only pollinators in the area, and crops rely greatly on them. Local agriculture and biodiversity is relying on bees, and we are wiping them out. It’s an uphill battle, just like a bee hunt, but the benefits are there, just like in a bee hunt. Don’t buy Himalayan honey if you see it, don’t engage in tourism that’s detrimental to the locals and their environment, and try to think about the impact you’re having whenever you’re traveling in a pristine area. Among the many lessons here, we should learn to be more conscious about our own travel footprints.

EDIT: Just to clarify, Newey didn’t participate on a touristic tour or anything like this. He found out about a small Gurung village almost by chance while he was visiting Nepal, tried talking to the villagers, but it was still to early to go hunting. Newey traveled to Bangladesh, where he helped a local village school by donating computers in exchange for information on the hunt. He rightfully earned the villagers’ trust and earned his place. I think this quote sums it up:

“I tested them on more than one occasion,” he says, “Just trying to say, ‘Look, we know you have to sacrifice a sheep as part of the ritual. If we pay for the sheep, will you give us a demonstration?’ And they just flat out refused, which was brilliant. We were happy to wait.”