by Mihai Andrei
in Feature Post, Geology
A A

We all know that Earth used to look very different in the geological past, but few would imagine that Europe was such a different place just 8,000 years ago. Back then, continental Europe was connected to the UK with a land mass called Doggerland. The area had a thriving history both for wildlife or for humans before it got flooded and met its current fate – flooded by hundreds of meters of water.

The Pleistocene is a geological epoch which lasted from 2,5 million years ago to 11,700 years ago. For most of the Pleistocene, Britain was actually a peninsula off the western coast of Europe, connected to the rest of the continent through a massive chalk formation. However, things started to change 450,000 years ago, during the ice age. The ice started to carve a tunnel through the chalk formation, creating the potential for Britain to become flooded. 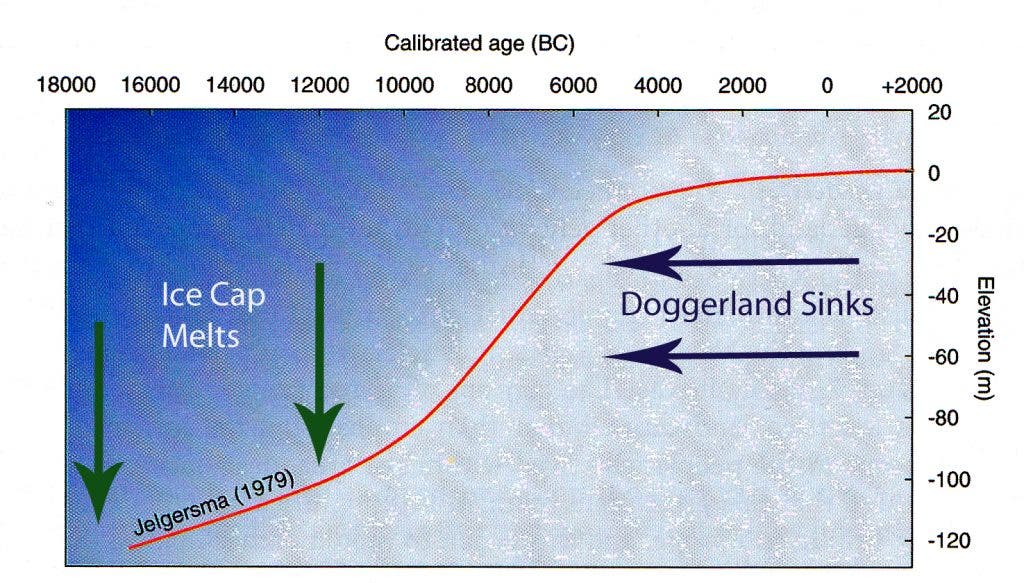 Some 20,000 years ago, the sea level started to rise as the climate warmed. The water covered more and more of the land mass, but even so, Doggerland still existed. Even with the continuous warming, 12,000 years ago, the area was a tundra, host to typical species, but also several human populations. As a matter of fact, some areas around Doggerland were very good locations for both animals and humans.

A large freshwater basin occupied the centre of Doggerland, fed by the River Thames from the west and by the Rhine in the east. The resulting marshes and mudflats were a haven for all life.

“In Mesolithic times, this was paradise,” explained Bernhard Weninger, from the University of Cologne in Germany.

But as the climate continued to warm up, sea levels continue to rise, and the people slowly started losing their hunting and gathering grounds. The most rapid rises of sea level were on the order of three to six feet a century, but because of the variable topography of the land, the flooding was not even. The British Isles were neither British nor Isles. They were simply highlands.

Most people would have been forced to migrate in order to adapt. Britain, once the north-western inhospitable corner of Europe became habitable. As temperatures grew higher and higher, deer and other critters moved towards the west, and many hunters soon followed. Doggerland remained an island until at least 5000 BC, hosting what was pretty much a doomed population at that time. The population might have lived a bit longer, had it not been for a catastrophic event.

Doggerland’s fate was to go down with a bang. Around 6,200 BC, a huge submarine landslide took place off the coast of Norway; today, we call it the Storegga slide, one of the biggest known such events. At that time, Doggerland featured a coastline of lagoons, marshes, mudflats, and beaches. Despite being surrounded by waters, it was still a thriving land, with a significant hunter-gatherer population. The landslide created a 4-5 meter tsunami in the area, destroying the population, covering Doggerland and separating the people people who migrated to today’s Britain from those who lived in Europe.

Doggerland went silent, its population being fish and kemp now instead of deer and humans. The area remained forgotten for almost 80 centuries until archaeologists started figuring out its past.

In the early 1900s, not much was known about Doggerland. Some geologists believed it had been recently a landmass, but nothing was known of the people who lived there. It wasn’t until 1913 that it received any attention.

In 1913, palaeobiologist Clement Reid recovered remains of animals and worked flints from the Neolithic period around the fringes of the area. Two years later, anatomist Sir Arthur Keith discussed the archaeological potential of the area in his book The Antiquity of Man. In 1931, the trawler Colinda hauled up a lump of peat whilst fishing near the Ower Bank, 40 kilometres (25 mi) east of Norfolk. The peat was found to contain a barbed antler point, possibly used as a harpoon or fish spear, 220 millimetres (8.5 in) long. Since then, archaeologists have recovered remains of a mammoth, lion and other land animals, and small numbers of prehistoric tools and weapons. A skull fragment of a Neanderthal, dated at over 40,000 years old was also found. Geologist Martin Warren said Doggerland was part of a “country Europe forgot”.

Surprisingly, the oil industry came to the help of archaeologists (and geologists) studying the area. Using highly sophisticated and detailed seismic surveys used to prospect the area, they provided the key information which allowed scientists to reconstruct the area’s past. Geologists were able to reconstruct a digital model of nearly 46,620 square kilometers (18,000 square miles) of what Doggerland looked like before it was flooded.

“We have speculated for years on the lost land’s existence from bones dredged by fishermen all over the North Sea, but it’s only since working with oil companies in the last few years that we have been able to re-create what this lost land looked like….We have now been able to model its flora and fauna, build up a picture of the ancient people that lived there and begin to understand some of the dramatic events that subsequently changed the land, including the sea rising and a devastating tsunami.”

Several artefacts have been found by fishermen working and trawling in the area, spiking the researchers’ interest. Divers off the eastern coast of England have also come across an ancient forest, exposed by a massive storm that dissipated the seafloor sand that covered it.

Of course, carrying detailed archaeological surveys is very difficult underwater, and knowing where to look is also challenging. However, researchers from the UK and Belgium are currently on a mission mapping the water subsurface, creating a detailed map of what was once Doggerland, viewing its former hills, plains, and even river valleys.

“We will be able to reveal how the landscape may have looked, how it changed as the climate warmed and – crucially – how this changed the relationship between prehistoric communities and their environment,” said Geo-achaeologist Claire Mellett.

Correlating these results with the recovered artefacts, the team will look at the most likely places to host artefacts and will focus their search there. In addition, sediment taken from the cores will be analyzed for traces of DNA and other environmental cues, offering an indication as to how the now-submerged landscape was colonized.

Another point of contention regarding Doggerland might be renewable energy: several sites are currently being considered for the development of offshore wind farms and building in such a unique archaeological site can be extremely challenging, especially when you don’t know exactly where the site is.

A Lesson to Learn

The story of the Mesolithic people and their home is a cautionary tale for us. The people were slowly forced out of their homes; their hunting lands on which they depended to survive were flooded, and there was nothing they could do to face climate change. Just look at what a huge area was flooded, and think that today, over 1 billion people live close to coastlines, in vulnerable areas.

Simply put, the people of Doggerland were early climate refugees. Like some coastal areas today, their homeland was slowly flooded, leaving the people first isolated — and then doomed.

Ultimately, Doggerland is much more than just a sunken land, with a few tools and animal remains to show for its rich history. It was a thriving environment, home to many people who desperately clung to it as the waters started to rise. Hopefully, its history won’t be relieved by today’s insular or coastal communities.