A stray dog followed a Swedish racing team through 430 miles (688 km) of jungles and rivers just because one of the team members gave him a meatball during one of the early halts.

A small good deed can have huge effects – this was proven by an extreme racing team and a stray dog. The heroic and heartwarming story of Arthur starts somewhere in the Amazon. Exhausted, wet, muddy and especially hungry, the team sat down for a meal as they prepared for a treacherous 20-mile trek through the Ecuadorian rainforest. As they opened a box of canned meat, a tired Mikael Lindnord noticed a scruffy, miserable stray dog looking at him. Without a second though, he took pity on the dog and gave him a meatball. Without anything else happening, the deal was sealed – the dog faithfully followed them throughout the race.

The team immediately formed a bond with the dog, and named him Arthur. Even though they had very limited food themselves, they shared what they had with Arthur.

“We checked our backpacks for more food and we found these two cans of soft food,” Lindnord says. “We took one bite each and we just gave the rest to Arthur, because he was really exhausted.”

By this point, you should understand what kind of race this is. This is a 430 mile race part of the Adventure Racing World Championship. Aside for being extremely long and dangerous, the competition also includes navigation, trekking, mountain biking and kayaking. It’s a gruesome challenge and just finishing it is an amazing achievement.

So that Arthur followed the team through knee-high muds and through the treacherous jungle is just mind-blowing. But one moment in particular was decisive. The team had to kayak on a river, and the race organizers advised them not to take Arthur – but the dog was steadfast and accompanied them by swimming. Here’s how the team remembers this moment:

“The organization gave the advice not to bring dog Arthur out on the last leg — a dog in the kayak didn’t seem like a great idea — and the team was going to follow this advice. Mike, Simon, Staffan and Karen put their kayaks down in the water and set off, but Arthur refused to be left and started swimming. This was too heartbreaking for the team, and Mikael helped Arthur up in the kayak. This led to standing ovations from everyone on the shore, seeing the five (!) team mates set off.”

A Member of the Team

It was a touching and decisive moment – it was when the team grew from 4 to 5 members.

“You can’t reject a dog that had put in so much energy into you,” Lindnord says. “It felt like he was one of the team members, and we didn’t want to let him down.” The gesture prompted cheers from spectators watching from the banks.“It was not easy [kayaking with Arthur]. He was shivering. We were also shivering, of course, but I had my Gore-tex jacket — so I put my Gore-tex jacket over him,” Lindnord says.

But Arthur quickly recovered, and he was even jumping in the water after to chase after fish. Lindnord had to stop the kayak and pick him back up several times.

For the next six days, everything that the team did, Arthur did too. It was even more surprising when, after the race was finished, the team learned that Arthur had a grave injury, suffered before the race started. Mud splattered, bleeding and exhausted, Arthur finished the race. The rest, as they say, is history.

After the race was over, everyone was wondering what the team will do with Arthur, but for Lindnord and the rest of the team, there was no question about it: the dog was coming with the team. But bringing a dog from the Amazon to Sweden can be extremely expensive, so hey embarked on a Twitter campaign that allowed them to raise money to not only bring Arthur back to Sweden, but also covered his medical bill, which included dental surgery. People from all around the world donated and became a part of this story.

The ordeal to get him back to Sweden was documented on the team’s Facebook page. In one post Lindord wrote:

‘I almost cried in front of the computer, when receiving the decision from Jordbruksverket (Board of Agriculture) in Sweden!’ The team is overwhelmed and happy knowing that Jordbruksverket has approved Mikaels application to bring Arthur to Sweden. A big important piece in the work to get Arhur on the plane, is done. So far so good. But, There are [sic] still one paper to go. The team are now working hard for the very last piece in this puzzel [sic].

Lindord ended by saying: ‘I came to Ecuador to win the World Championship. Instead, I got a new friend.’

There was also a very long quarantine period (120 days), but after all this, after the money was raised, the medical bill was paid for and the quarantine was over, Arthur finally arrived to the small locality of Örnsköldsvik, Sweden, where he is happily living to this day.

It’s a story with a happy ending, a story about friendship and loyalty. Furthermore, the fascinating story also inspired the team to set up a charity organization that supports the adoption of stray dogs as pets. 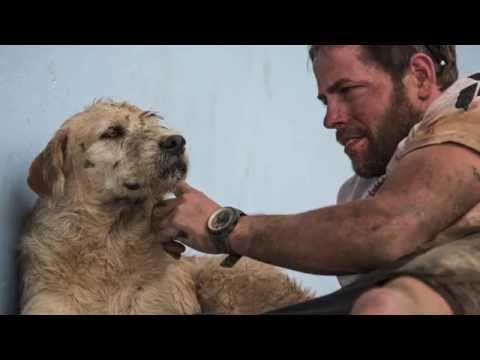