Can China’s straddling bus be a solution for crowded roads?

This extraordinary bus concept has been all over the internet, promising to revolutionize public transportation, making it more efficient and greener in the process. But could it actually work?

by Mihai Andrei
in Design, News, Technology
A A

This extraordinary bus concept has been all over the internet, promising to revolutionize public transportation, making it more efficient and greener in the process. But could it actually work?

The bus would carry up to 1,400 passengers, traveling up to 40 miles an hour (64 km/h), above regular cars on a special track. To make it a bit cuter, its underbelly actually simulates the sky, so the car drivers are bothered as little as possible.

The bus would replace 40 buses, holding up to 1400 passengers. This would, in turn, cut annual fuel consumption by 800 tons and carbon emissions by almost 2,500 tons, running on electricity. But the biggest advantage of the bus is that it would be saving a lot of space – carrying many passengers while not taking any additional road space.

“The biggest advantage is that the bus will save lots of road space,” Song Youzhou, the project’s chief engineer, told Xinhua, China’s official news agency.

He claims that the bus would fulfill a similar role to the subway, but at 16% of the building costs and at a much faster build rate. With car ownership soaring in recent years and air pollution going through the roof, encouraging public transportation and making it more efficient is definitely a top priority for officials – but could it actually work? 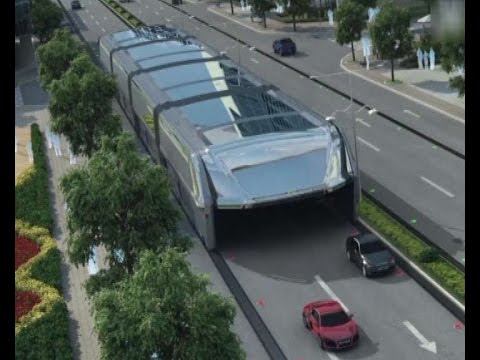 The idea, as revolutionary as it seems, is not new. This concept was first presented by two American architects, Craig Hodgetts and Lester Walker, as part of their “immodest proposal” for redesigning New York City back in 1969. They called it the Bos-Wash Landliner, as it would run between Boston and Washington D.C. Writing in New York Magazine and providing a drawing, they said:

“The Bos-Wash Landliner, bound for Boston, streaking through the 86th street reservoir area of Central Park … just about to drop off and pick up busloads of commuters before it resumes full speed of 200 miles an hour. It rides on nearly friction-free air cushion bearings (those plates which you see hugging the sides of the road are something like vacuum cleaners in reverse; the horses connecting them to the turbine-powered, ducted fan-jets above are filled with air). The fan-jets themselves have a regenerator cycle, which means no hot exhaust—important since the Landliner will be zooming only 16 feet over your head if you are driving along the freeway.”

The concept is really similar to the Chinese one, but since 1969 it has remained just that – a concept, an idea. Nothing ever came of it. Song first introduced his version in 2010, making international headlines just like he did now, but again, nothing happened after that. This time, however, it might be different.

According to the Xinhua news agency, the Beijing-based company Transit Explore Bus is already exploring the possibility and building a life-sized model in Changzhou and they plan to test it in July or August, just months from now. So enough with the theoretical engineering considerations, let’s just build and see how it goes. Song expressed his confidence in the project, and he said that other Chinese cities have also expressed an interest in the idea, to test the feasibility.

“Our first test bus is planned to be put on track in north China’s Qinhuangdao City at the end of July or in August,” he said.

But even if it works as a concept, that doesn’t mean it can actually work on the streets. I could easily see this technology causing mayhem, at least at first. It’s also not clear if this could be applied at a greater scale, and what the repair and maintenance costs would be. So if the model prototype works, then we also need another street prototype to see how it impacts traffic, and only then can we start considering it. It could be a promising technology, but we don’t know yet, and there’s still a long time before it could hit the streets.