The world’s tallest building to be built in only 90 days [!]

by Tibi Puiu
in Other 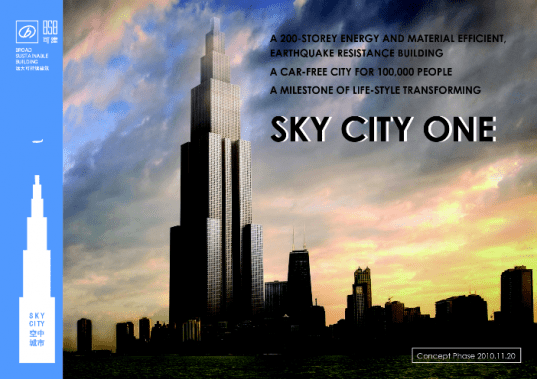 According to biblical account, the Tower of Babel was an enormous tower whose top was intended to reach for the very heavens. Amused by this ploy,  God said “Come, let us go down and confound their speech.” With their tongues twisting words in different languages, the people there couldn’t coordinate their efforts any longer. Man never gave up on tall constructions, even though the heavens have been breached a century ago and well beyond, to space.

The current tallest building in the world is Dubai’s Burj Khalifa. Standing at 828-meters tall, it took five years to complete. Now, a Chinese construction company,  Broad Sustainable Building (BSB), claims that it intends on building the tallest building, the eco-friendly Sky City tower, in Changsa, China in a mere 90 days!

Preposterous as it may sound, these guys are dead serious. You might remember that viral youtube video which circled the globe showing how a 30 storey Chinese hotel was built in only 15 days. They’re the same guys. The skyscraper in Changsha will be built using more or less the same technique, whose lightning fast pace secret is of prefabricating each floor – actually 95% of the building will be constructed in a factory before the construction team break grounds. Still assembling the tallest building in the world in only 90 days remains a monstrous task, and it’s cheap too, in skyscraper terms at least – $628 million.

Sky City building isn’t that fragile as one would imagine, either. It will have 15-centimeter thick exterior walls and use one-fifth of the energy a regular building usually consumes.  The 220 storey building will actually be a whole city, designed to house over 100,000 people! Now, I have no idea what its structural capabilities are, though. One major earthquake might pull it down, however, the 15 days-built hotel can withstand a earthquake measuring 9 on the Richter scale, similar to the one which hit Japan last summer. I believe the same will apply to the Sky tower as well.

Competitors and local news outlets, alike, however have expressed their skepticism regarding the project. “It’s very hard to believe that [BSB] will be able to build an 800-plus-meter skyscraper in [such a short period of time],“ say competitors  Gensler. Not many details are available as of yet, but the company has signed an agreement with the local Wangcheng district authorities in Changsha and is currently pending approval from the central government. If granted, BSB claims they’ll begin construction of the Sky City building in November 2012 and complete it in January 2013.