American media consumption to soar in 2015

by Tibi Puiu
in Other, Science
Reading Time: 2 mins read
A A
Share on FacebookShare on TwitterSubmit to Reddit

The U.S. is not only the biggest energy consumer per capita in the lord, but also the leading media consumer. An estimated 6.9 zettabytes of media flows to individuals and households in a year or 6.9 million million gigabytes. That’s almost twice as much than in 2008 and according to the latest “How Much Media? 2013 Report on American Consumers,” produced by the Institute for Communications Technology Management (CTM America’s hunger for media is from becoming saturated. By 2015, 8.75 zettabytes worth of information will flow annually, or 74 gigabytes — 9 DVDs worth — of data sent to the average consumer on an average day.

To put things into perspective if were to print the information gobbled up as media by US consumers as books, keeping in mind that 1 byte is equivalent to one character of text, stacked those books as tightly as possible across the United States, including Alaska and Hawaii, the pile would be almost 14 feet high. That’s quite a lot and it’s only set to increase.

The report breaks down media into as many as 30 categories, like gaming, TV, social media etc. Interestingly enough, although some might say it’s safe to say computers are ubiquitous, traditional media still dominates how people consume information as two-third of viewing time is reserved to TV, radio and voice calls while digital platforms account for only one-third. Digital is worth half of total amount of information, however, and this will only grow in coming years. In time, the system will be shifted from measuring hours of media consumption to measuring bytes. 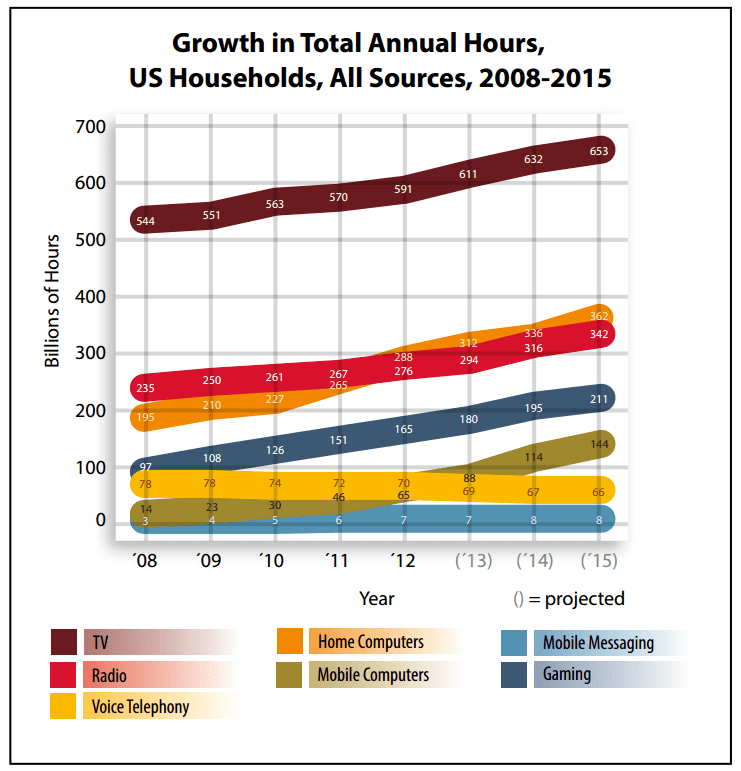 Here are some more media consumption stats for 2015: