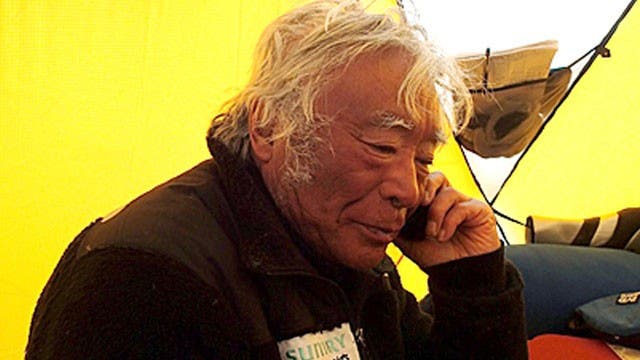 Miura and his nine-person team climbed on the southern ridge, the same path that Edmund Hillary took 60 years ago when he became the first documented man to climb Everest. Accompanied by his son, two other Japanese and six Nepali sherpashttps://www.zmescience.com/tag/everest/, he set out for the peak on 2 AM local time. At Miura’s Tokyo office, his family, including his wife and two daughters, danced arond the phone waiting for the successful phone. When the phone finally came, the cocktail of emotions and excitements broke loose:

“This is the best feeling in the world,” Miura said, from the summit in a phone call to his family. “I never imagined I would become the oldest man to get here, at 80. There’s no greater feeling in life, but I’ve never felt this tired either.”

His feat is even more remarkable considering his recent medical history – he suffered four heart surgeries to treat recurring arrhythmia, including one just two months before he set out on his latest journey. In 2009, a skiing accident left him with a broken pelvis and fractured thigh.

But Miura is no stranger to amazing feats. It was his third successful climb on Everest, the first one coming in 2003, when he was already 70 years old. In his younegr years, he skied down Mount Everest’s South Col, an adventure that was documented in the 1975 Academy Award winning documentary, “The Man Who Skied Down Everest”.

But Miura will definitely have a run for his money to keep this title – his rival, Nepal’s Min Bahadur Sherchan, has matched him every step of the way surpassing his records every time. In 2008, he successfully made the climb to Everest’s summit one day before Miura, at the age of 76 and 340 days, according to the Guinness World Records site. Now, Sherchan, who is currently 81, is preparing his next trip to Everest, in another attempt to snatch the title.

The competition between the two octogenarians is absolutely stunning, pushing the limits of human possibility each year. But to me, what’s the most beautiful thing about them is that they’re not doing it as part of a competition – they’re doing it to better themselves, and as a tribute to Nature.

“It is to honor the great Mother Nature,” he said on a statement posted on his website. “Hoping to raise even an inch of human possibility.”