by Mihai Andrei
in Environment, Health & Medicine, News, Renewable Energy
Reading Time: 3 mins read
A A
Share on FacebookShare on TwitterSubmit to Reddit

An innovative project which addresses both environmental and health concerns has been revealed in Delhi, India. 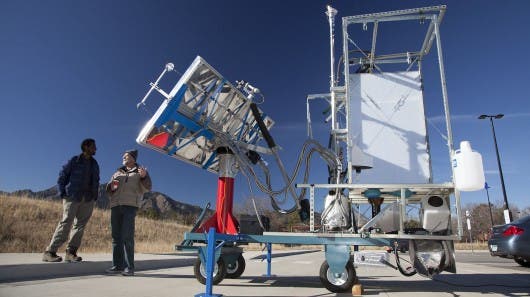 It’s estimated that 2.5 billion people in the world (almost 1 in 3 people) lack proper sanitation – something unimaginable in the developed world. With that thought in mind, a team at the University of Colorado Boulder has designed a self-contained, solar-powered, waterless toilet.

Solar power is the key for this project, which was funded by the Bill and Melinda Gates foundation. It features eight parabolic mirrors that catch sunlight and focus it onto a small spot on a quartz-glass rod. From there, energy is transferred to eight bundles of fiber-optic cables, which produce in total 700 watts of energy. This energy is used to treat the waste.

First of all, the urine is separated from the fecal matter; urine and used hand wash water are sent to a pretreatment storage tank. After the collection vessel is filled, it is sent to the treatment chamber, where it is illuminated by concentrated sunlight and heated to temperatures between 200ºC (392ºF) and 600ºC (1,112ºF) depending on the daily solar conditions. The urine is also treated with a small solar heater to a temperature of 60ºC (140ºF) to 70ºC (158ºF) for up to 90 minutes. Odor control is achieved with an exhaust fan and an in-line filtration process using the produced char as an adsorbent.

“Biochar is a valuable material,” said principal investigator Karl Linden, professor of environmental engineering. “It has good water holding capacity and it can be used in agricultural areas to hold in nutrients and bring more stability to the soils.”

A soil mixture containing 10 percent biochar can hold up to 50 percent more water and increase the availability of plant nutrients, he said. Additionally, the biochar can be burned as charcoal and provides energy comparable to that of commercial charcoal.

The technology in itself is not groundbreaking – what is innovative is the transmitting solar energy to a customizable location through fiber-optic cables and applying this for sanitation purposes.

Such a device can be used by 4 to 6 people per day, but researchers are already working on a bigger version, which could be used by several households daily. If this type of technology would be implemented, it would make a huge difference, especially considering the 700,000 children worldwide, who die from illnesses caused by water contaminated with fecal matter. Thankfully, researchers believe this type of system will become a reality in the near future – thanks to the financial support from the Gates foundation.

“We have a lot of excitement and energy on our team, and the Gates Foundation values that,” Linden said.  “It is one thing to do research, another to screw on nuts and bolts and make something that can make a difference. To me, that’s the fun part, and the project is a nice fit for CU-Boulder because we have a high interest in developing countries and expertise in all of the renewable energy technologies as well as sanitation.”