by Tibi Puiu
in Health & Medicine, Mind & Brain, Other
Reading Time: 2 mins read
A A
Share on FacebookShare on TwitterSubmit to Reddit 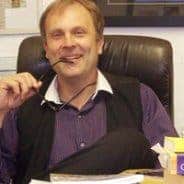 It’s ignorance like this that never sees to baffle me. Steve Pop is an overnight notorious psychotherapist who, like most of today’s center stage and tomorrow’s props, became famous after stating live on BBC Radio that “spending two hours on a game station is equivalent to taking a line of cocaine in the high it produces in the brain.”

“It’s the silent killer of our generation.” He goes on to say.

“We’re now onto second generation game station players who have always grown up with it. Computer game addiction can also spiral into violence as after playing violent games, they may turn their fantasy games into reality.

“It is the fastest growing addiction in the country and this is affecting young people mentally and physically.”

Describing his campaign against gaming as a “personal quest to spread the message”, Pope urged any parents listening to the broadcast to “go upstairs to your kids bedroom and try and take the game station controller out of their hands“.

He said most kids will react “in the same way as an alcoholic would if you tried to take their booze – it’s scary“.

I can agree to an extent that gaming addiction is VERY real, and for some people it can cause a lot of problems, 99% of the time of social order – I would never compare gaming with high danger drug use. Actually you can tell from his description of PS3s and XBOXs like “gaming stations” and the aforementioned relation to cocaine that Mr. Pop has no idea what he’s talking about concerning gaming or cocaine. Putting the two in a sentence together is preposterous enough.

In fact this very much reminds me of misinterpreted and misinformation anti-drug campaigns that actually do a lot more harm than good. How about providing facts and real solutions to problems, be it drug use or excessive gaming?