Tobacco plant might play a role in fighting cancer

La Trobe University research has revealed a tobacco plant’s natural defense mechanisms could be harnessed to kill cancer cells in the human body. The research is still in its initial stages, and has a long way to go before it can even be regarded as a viable anti-cancer possibility, but there are some promising results. 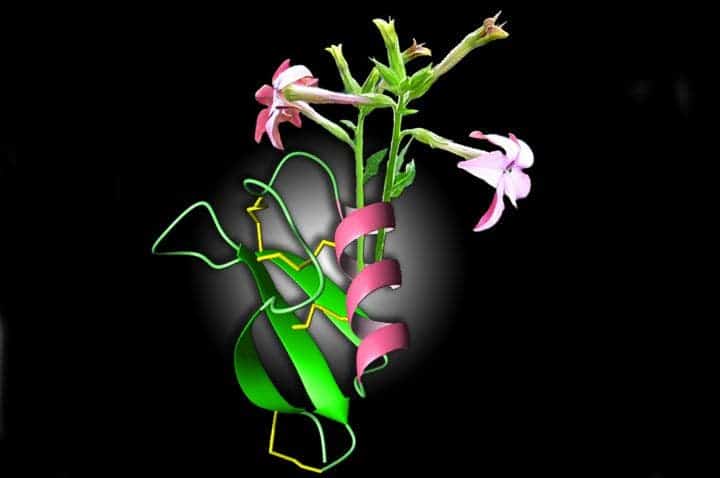 Scientists at the La Trobe Institute for Molecular Science have identified some remarkable properties of the tobacco plant. Apparently, a molecule in the flower of the plant not only fends off fungi and bacteria, but it also has the ability to identify and destroy cancer.

The molecule (NaD1) works in a pretty brutal way – it forms a pincer-like structure which basically rips the lipide membrane of the cancer cell open, causing it to expel its contents outside and expel. The results are published in the journal eLife today. This molecule has potential applications in many fields, but lead researcher Dr Mark Hulett is most interested in fighting cancer:

“There is some irony in the fact that a powerful defence mechanism against cancer is found in the flower of a species of ornamental tobacco plant, but this is a welcome discovery, whatever the origin,’ Dr Hulett said. The next step is to undertake pre-clinical studies to determine what role NaD1 might be able to play in treating cancer. The preclinical work is being conducted by the Melbourne biotechnology company Hexima. So far the preliminary trials have looked promising.”

But we for onto the ‘cure for cancer’ hype train, let’s look at this objectively. What the researchers have shown is that this peptide works against cancer cells in a Petri dish, in vitro – many, many things work well against cancer in vitro. They’re still a long way from even testing this as a viable possibility – they have to first see how it behaves in a living system, that is, initially testing it in healthy animals (most likely mice). See how long it takes to get in the body through different routes, what concentration reaches the target, and so on – the so-called pharmacokinetics. You also have to look for side effects and potential health hazards. Then, you are ready to test it out in mice with implanted tumors – if it doesn’t work, it’s not a cancer treatment. If it works, there’s still a 90% chance it can’t be used in humans – but trials will go on, ultimately moving on to humans. That’s the long, almost excruciating route any potential treatment for cancer has to follow. It takes years, and even some promising ideas fail – but you have to start somewhere.

This is not to take anything from the researchers – their study is indeed valuable, and it holds a lot of promise – either in itself, or in its underlying mechanism.

“We are confident there is potential for this discovery to translate to therapeutic use in humans. One of the biggest issues with current cancer therapies is that the effect of the treatment is indiscriminate,” Dr Hulett said. “In contrast, we’ve found NaD1 can target cancerous cells and has little or no effect on those that are healthy.”

This indeed, sounds very good. We’ll just have to wait and see.