Bill Nye debates Ken Ham – and why this is so important

I’m gonna go into a little more details about both people and the discussion, but I just want to get out the main idea for people who don’t have the time/don’t want to watch the entire debate. Bill Nye is a scientist, Ken ham is a creationist who advocates taking the Bible literally. At one point in their discussion, this was said:

Bill Nye: “What would change your mind?”

Ken Ham: “No one is ever going to convince me that the word of God is untrue.” 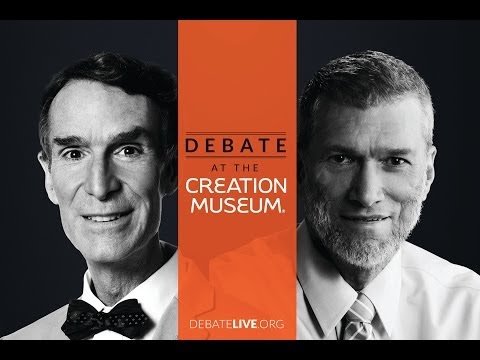 William Sanford “Bill” Nye, or, as most people know him, Bill Nye the Science Guy is an American scientist, and at the same time, he’s an entertainer. You could call him a science educator. Kenneth Merle “Ken” Ham is a young-Earth creationist who advocates a literal interpretation of the Book of Genesis. He is the president of Answers in Genesis (AiG) and the Creation Museum. In case you don’t know (I didn’t) Young Earth creationism is the religious belief that the Universe, Earth and all life on Earth were created by direct acts of the Abrahamic God during a relatively short period, between 5,700 and 10,000 years ago. If this were the case, then pretty much everything we know in the fields of physics, chemistry, astronomy, geology, biology, anthropology (and the list goes on) – is wrong.

So why was this debate so damn important?

First of all, I firmly think that people who take the Bible literally (more or less) and people who follow science should talk more to each other. Given the huge proportion of Americans (over 30%) who fall in the first category, debates such as this one should take place regularly. Second of all, the debate took place in the Creationist Museum. Most of the people who go there have never even heard the basic principles of evolution and science. Bill Nye went on the opponent’s ground, deep behind ‘enemy lines’, and, dare I say, he won.

He didn’t convince Ken Ham, or other people like him. You can’t convince people when they won’t listen to reason. Bill wins just by causing doubt and raising issues; the people who watched this and want to think for themselves will start to ask questions. They might want to learn more, understand more, have more perspective. Put it shortly – people will start to think. Bill won.