The AAA Foundation for traffic safety ordered a handful of studies that assess the effects marijuana legalization had on driving safety. The studies arrived at a number of worrisome conclusions. Fatal crashes involving drivers who used marijuana doubled since the state lifted the ban. Also, researchers found the marijuana blood limit allowed for driving, known as per se limits, is arbitrary and not based on actual science.

by Tibi Puiu
in Health & Medicine, News
Reading Time: 5 mins read
A A
Share on FacebookShare on TwitterSubmit to Reddit

The AAA Foundation for traffic safety ordered a handful of studies that assess the effects marijuana legalization had on driving safety. The studies arrived at a number of worrisome conclusions. Fatal crashes involving drivers who used marijuana doubled since the state lifted the ban. Also, researchers found the marijuana blood limit allowed for driving, known as per se limits, is arbitrary and not based on actual science.

Since November 2012, the state of Washington passed by popular vote the ballot Initiative 502 allowing adults over 21 to legally possess up to 1 ounce of marijuana for personal use. Overall, the new law proved extremely successful. Sure, the people wanted it, but it proved to be one of those laws whose social impact was unexpectedly positive. According to a report issued by the  Drug Policy Alliance, since  the passage of I-502:

Although DPA reports a stable number of traffic fatalities after the law was passed, one of the studies commissioned by the AAA Foundation seems to firmly disagree.

To this day, it’s still not clear what’s the prevalence of driving after marijuana use, but since January 2016 we know a bit better. The Washington Traffic Safety Commission (WTSC) issued a public database containing toxicology tests for THC performed on drivers involved in fatal crashes in the state of Washington. 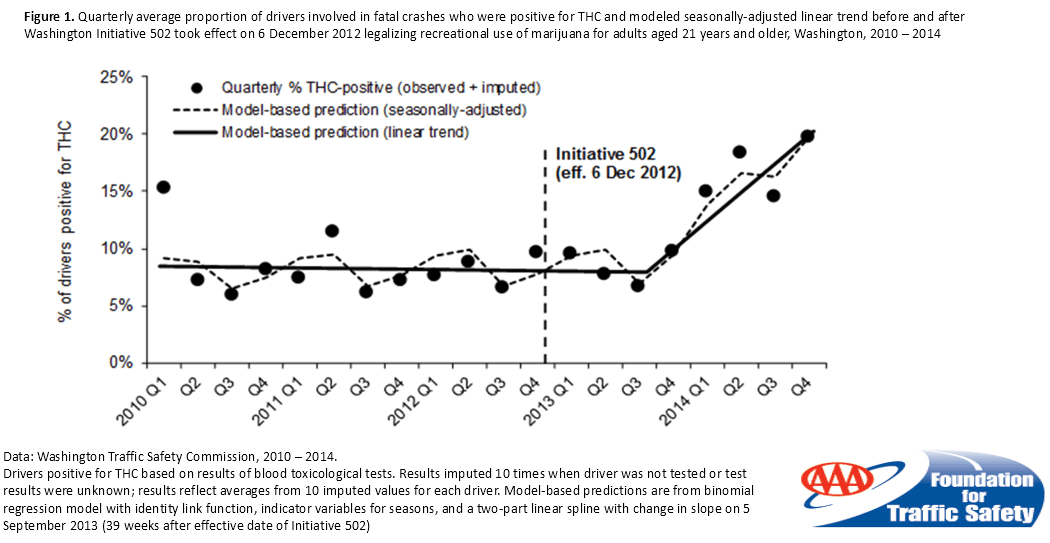 Take the outcomes with a grain of salt, though. Only 34% of the fatal crashes included in the WTSC database involved drivers who used only marijuana and nothing else. 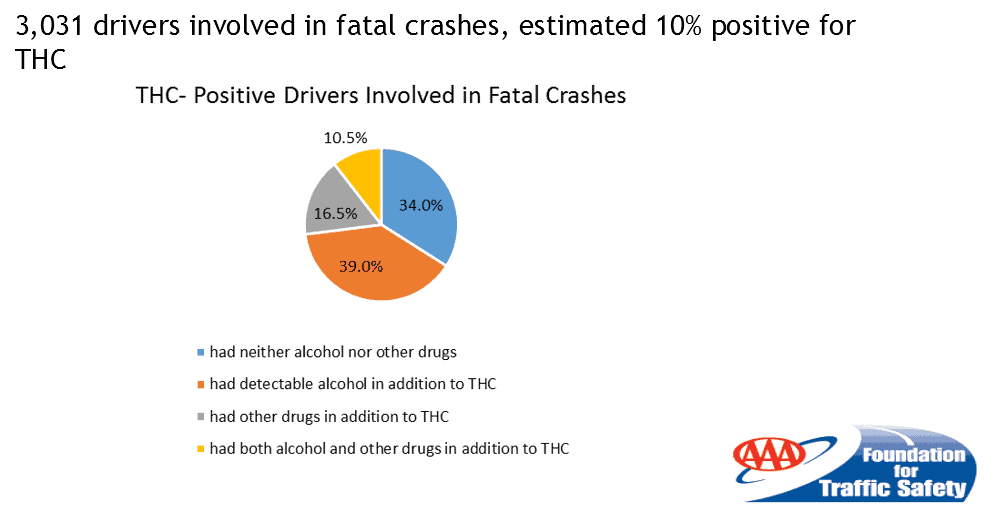 It’s true, however, that marijuana significantly impairs judgment, motor coordination, and reaction time. So does alcohol, though. The state of Washington prohibits the operation of a motor vehicle by a driver that has a .08 percent or higher blood alcohol concentration (BAC). A similar prohibition was passed for marijuana use, namely drivers aren’t allowed to drive with more than  5 nanograms of THC per milliliter of blood.

Marijuana and THC don’t metabolize the same, though. A second AAA study found THC levels in the blood could not accurately predict driving performance.

The researchers used data from the police involving people arrested for driving under the influence of THC. Two types of tests are commonly used by law enforcement to gauge marijuana-related driving impairment. There’s the classic Standardized Field Sobriety Test where you have to walk down a line, touch your nose with the hand while one leg’s in the air etc. This so-called standard field sobriety test has been shown to catch 88 percent of drivers under the influence of alcohol. Then there’s THC blood measurement, that’s supposedly meant to gauge driving impairment in an objective manner.

When researchers compared the two test results for the same people, they found a substantial number of drivers who failed the THC tests actually passed the physical one. These findings seem to confirm  a 2012 study published in the journal Psychopharmacology which found only 30 percent of people under the influence of THC failed the field test.

In other words, some could take a toke and drive safely, yet fail the test and face criminal charges. At the same time, some would smoke, pass the THC test but obviously fail at driving. “Based on this analysis, a quantitative threshold for per se laws for THC following cannabis use cannot be scientifically supported,” the researchers say. The same is likely happening in Montana and Colorado, as well.

We need a better way to objectively gauge safe marijuana driving levels. Until then, the AAA urges law enforcement to stick to the Standardized Field Sobriety Test only.