It could transform how heart transplants work.

Each year, about 26 million people worldwide suffer a heart failure and donors barely cover a fraction of the demand. Swiss researchers at ETH Zurich want to make heart transplants a lot easier and safer. While their solution isn’t meant to replace a heart, the artificial silicon heart they developed is set to increase the rate of success of transplant operations.

In the crucial minutes between when a patient’s heart stops beating and doctors prepare the transplant of a new heart from a donor, surgeons use blood pumps to bridge this gap. Sometimes, however, the mechanical parts of the pump can cause unwanted complications that can ruin the operation, threatening the life of the patient.

The 390-gram artificial heart is designed to have the size as the patient’s own one so it can fit. Because it’s 3-D printed, it could actually completely mimic the patient’s own heart both in appearance and function. 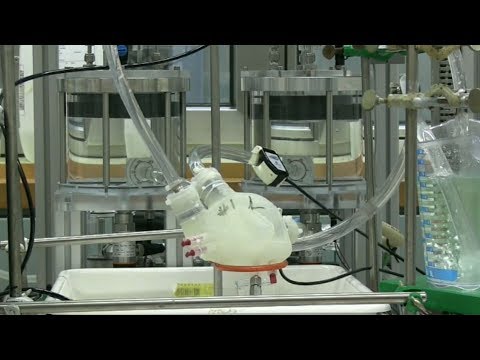 It’s comprised of a left and right ventricle which are separated by another chamber that inflates and deflates with air pressure, thus mimicking the pumping action of the human heart. It came to life during the doctoral studies of Nichals Cohrs, who is now part of the Zurich Heart project which focuses on improving existing blood pumps.

Tests show the heart can last around 3,000 beats or 30 to 45 minutes of operation, after which the material starts to collapse under the strain. The findings were reported in the journal Artificial Organs.

“This was simply a feasibility test. Our goal was not to present a heart ready for implantation, but to think about a new direction for the development of artificial hearts,” said Cohrs.

For the next prototype, the researchers plan on significantly improving the tensile strength so the artificial heart can beat on for hours if it has to.

“As a mechanical engineer, I would never have thought that I would ever hold a soft heart in my hands. I’m now so fascinated by this research that I would very much like to continue working on the development of artificial hearts,” said Anastasios Petrou, a doctoral student of the Product Development Group Zurich.

It’s efforts such as this that lend hope one day we’ll be able to make artificial hearts that can be fitted instead of a patient’s own heart. Already, there are some options but they’re not there yet in terms of functionality. For instance, a 25-year-old man from the US lived without a heart for more than a year, carrying his artificial heart in a backpack with him. You can read more about his amazing story in a previous ZME article.