A major study conducted by the Harvard School of Public Health, which involved 110.000 people, concluded that eating as little as two pieces of pork per day or one hot dog can raise the mortality rates of mortality by 20%, while showing that substituting red meat with other sources of protein, such as fish, chicken or vegetables can lower mortality rates.

“Our study adds more evidence to the health risks of eating high amounts of red meat, which has been associated with type 2 diabetes, coronary heart disease, stroke, and certain cancers in other studies,” said lead author An Pan, research fellow in the Department of Nutrition at HSPH. 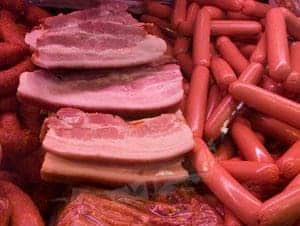 Just one daily serving of unprocessed red meat (no bigger than a deck of cards) was associated with a 13 percent increased risk of mortality, while one daily serving of processed meat (like a hot dog or 2 strips of bacon) raised that risk to 20%. The study also took into consideration the age, body mass index, physical activity, and family history of heart disease or major cancers of the patients and includes them in calculating the increase in mortality rates.

Via The Harvard Gazette