It could be a cure for humans too!

A pair of English bull dog puppies with spina bifida have been treated with a combination of surgery and stem cells. Now the little rascals can run and play like any other pup. The researchers see this as a great breakthrough and think that they can cure human babies of spina bifida also.

Spina bifida is a serious birth defect in which the spinal tissue doesn’t fuse properly. Therefore, it causes mobility, cognitive, urinary, and bowel disabilities. Depending on the country, the defect affects between 0.1 and 5 of 1000 births. Researchers at the University of California, Davis are trying to solve this problem with stem cells. In a first trial, prenatal surgery and human placental derived mesenchymal stromal cells helped affected lambs to walk normally.

Next, the researchers tested the therapy on a pair of English bulldog puppies, Darla and Spanky. Puppies with spina bifida are usually put down because they can’t control their rear half so well. Darla and Spanky are four months old now and just had a check up. They can run and play just like any other dogs. Both dogs have been adopted and live in New Mexico now.

Their veterinarian Berly Sturges commented, “The initial results of the surgery are promising, as far as hind limb control. Both dogs seemed to have improved range of motion and control of their limbs.”

This surgery could mean that human babies could be cured of spina bifida soon. One important distinction to make it that the surgery for the dogs occurred after they were already born because the disorder only becomes apparent after a week. The pair of puppies underwent surgery when they were 10 weeks old. For humans, this surgery would need to take place while the baby is still in the womb. 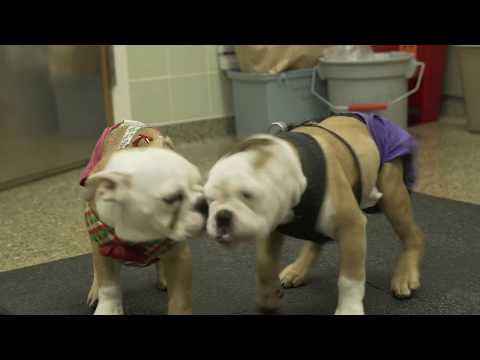 The therapy wasn’t completely perfect. As you noticed in the video, the dogs are wearing doggie diapers. Yes, they can’t control themselves. This is another symptom of spina bifida, and one that will require more testing and clinical trials to fix. As far as this study goes, we can’t know how the dogs’ cognition was affected. In dogs and humans, this is, of course, different and you can’t really compare the two. It would be interesting to see if this therapy only helps with mobility or can help with cognitive abilities also. That would really show if this therapy is a cure for spina bifida.

After some more tests and approval by the US Food and Drug Administration, the surgeons want to test this same surgery on humans. The goal: to eliminate spina bifida.