Owning a dog will make you healthier

by Tibi Puiu
in Anatomy, Health & Medicine
Reading Time: 2 mins read
A A
Share on FacebookShare on TwitterSubmit to Reddit 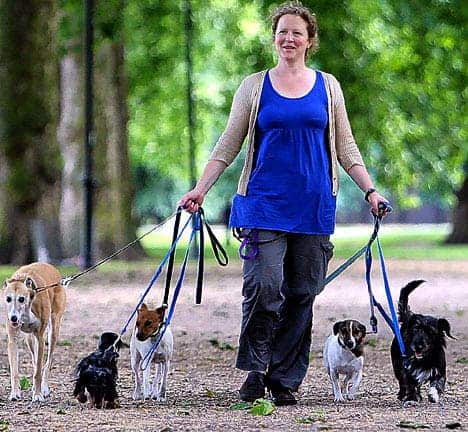 While a dog’s psychological value to its owner is very much attested, helping cure loneliness and such, a recent study published in the Journal of Physical Activity and Health, finds that people who own and walk a dog are 34 percent more likely to meet federal benchmarks for physical activity.

“Walking is the most accessible form of physical activity available to people,” says Matthew Reeves, professor of epidemiology at Michigan State University.

“What we wanted to know was if dog owners who walked their dogs were getting more physical activity or if the dog-walking was simply a substitute for other forms of activity.”

The study states that, obviously enough, people who own and walk a dog reach a higher walking amount as  opposed to another that doesn’t own a dog, but what researchers found interesting enough is that dog walkers are physically more active, generally walking about an hour longer per week than people who owned dogs but did not walk them.

“Obviously you would expect dog walkers to walk more, but we found people who walked their dog also had higher overall levels of both moderate and vigorous physical activities,” Reeves says.

“There appears to be a strong link between owning and walking a dog and achieving higher levels of physical activity, even after accounting for the actual dog walking.”

Walking is deemed the most easy and accessible form of exercise by fitness specialists, and you’d be imagined how much good 20 minutes worth walks a day can do for the mind, body and spirit. The study analyzed the amount of leisure-time physical activity a person gets, including sports participation, exercise conditioning, and recreational activities such as walking, dancing, and gardening. According to Public health benchmarks 150 minutes of such activities are warranted each each.

“There is no magic bullet in getting people to reach those benchmarks,” Reeves says, “but owning and walking a dog has a measurable impact.”

Well it seems that owning and walking a dog (if you’re one of those people who just let their pupps in the yard all day long, shame on you) is really recommended, so if you can afford the responsibility of getting a dog, you shouldn’t think too long about the decision.

“The findings suggest public health campaigns that promote the responsible ownership of a dog along with the promotion of dog walking may represent a logical opportunity to increase physical activity,” Reeves says.