by Tibi Puiu
in Health & Medicine, Neurology, News
A A
Share on FacebookShare on TwitterSubmit to Reddit

A brain-computer interface (BCI) developed at Stanford Bio-X allowed monkeys to use their thoughts to type passages from a New York Times article or Shakespear’s Hamlet at a speed of up to 12 words per minute. That’s faster than my dad — seriously. The researchers note that this is the fastest communication achieved with a BCI so far. Using what they learned, the researchers say they can make better typing tools for the disabled that are less tiring than other methods that involve tracking the eye or muscles, though you still need to drill the skull to implant electrodes.

“Our results demonstrate that this interface may have great promise for use in people,” said Paul Nuyujukia, a postdoc at Stanford and co-author of the paper published in IEEE Xplore. “It enables a typing rate sufficient for a meaningful conversation.”

There are various solutions available to patients with movement disabilities. The most common tools involve tracking the eye so just by looking at control keys or cells displayed on a screen, a user is able to communicate either by typing a message or selecting pre-programmed phrases. That’s sort of how Stephen Hawking’s type to speech computer works, albeit it’s based on muscle movements because he has drooping eyelids.

“My main interface to the computer is through an open source program called ACAT, written by Intel. This provides a software keyboard on the screen. A cursor automatically scans across this keyboard by row or by column. I can select a character by moving my cheek to stop the cursor. My cheek movement is detected by an infrared switch that is mounted on my spectacles. This switch is my only interface with the computer. ACAT includes a word prediction algorithm provided by SwiftKey, trained on my books and lectures, so I usually only have to type the first couple of characters before I can select the whole word. When I have built up a sentence, I can send it to my speech synthesizer. I use a separate hardware synthesizer, made by Speech Plus. It is the best I have heard, although it gives me an  accent that has been described variously as Scandinavian, American or Scottish,” Hawking wrote on his website.

While this sort of technology has proven invaluable to many patients around the world, they come with many limitations. The communication is slow and can be very tiresome, especially if the software is buggy.

The Stanford researchers are confident that brain-computer interfaces will be the future because the technology ought to overcome many of the challenges faced with mainstream solutions.

Their BCI involves implanting a multi-array electrode straight into a region of the brain that is responsible for hand and arm movements. This way, the user can move a mouse cursor. The crux, however, lies in the proprietary algorithm developed by Stanford responsible for translating brain signals and accurately selecting the right letters.

Two rhesus monkeys were implanted with the communication prosthesis, then the researchers put them face to face with a task disabled humans encounter on a daily basis. Previously, the monkeys were trained to type using their fingers on a touchscreen the letters they would see displayed on a screen.

Now, the monkeys had to transcribe text using their thoughts alone. The two monkeys achieved a typing speed of 12.0 and 7.8 wpm, respectively, or three times faster than previous BCI attempts. On average, Americans type 39 wpm on average. 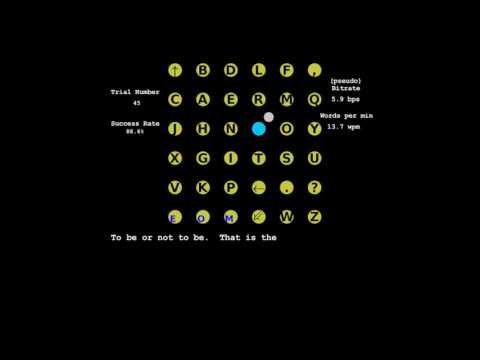 Although transcribing passages from the New York Times and Hamlet might sound impressive, the monkeys didn’t actually understand what they just typed. A human user will likely type more slowly because they also have to think what words to use or how to spell them.

Still, the fact that a pair of monkeys was able to type 12 words per minute means that a lot of people will be able to communicate faster and have meaningful conversations.

“Also understand that we’re not using auto completion here like your smartphone does where it guesses your words for you,” Nuyujukian said, noting their interface and algorithms could be significantly upgraded.

The two monkeys had the electrodes implanted into their brains four years ago, and they’re still stable and performing well. For now, this technology works well only if invasive surgery is performed to introduce the implants in direct contact with the brain. There’s hope that simple electroencephalogram caps might be used someday.