I don’t smoke – and I’m grateful for that every day. But 2 billion people do smoke, and face the problems associated with this vice. I wasn’t able to find out how many of them smoke menthol, but judging from the people I know, I can guess there are a lot; according to a Canadian researcher, they a stroke risk more than two times bigger than those who smoke regular.

“Current mentholated cigarette smokers have an over two times greater risk of having stroke,” says Nicholas Vozoris, a Canadian scientist who conducted the research. “And particularly driving this association were women and non-African Americans.” 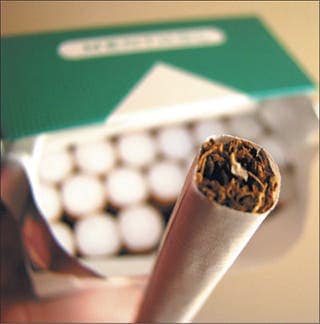 For his study, Vozoris used data obtained from over 5000 smokers from the US, recorded in a government study. According to the WHO, over six million people are killed each year due to tobacco alone, which raises the risk of lung cancer by 80 percent, as well as the risk of stroke and other heart conditions.

Vozoris says other scientists have studied how menthol affects the body, and they found that it acts to increase the length of each inhalation of toxic cigarette smoke. However, one possible explanation might come from a recent study conducted in Turkey which found that both menthol and non-menthol cigarettes decreased blood flow through the heart.

Bottom line is cigarettes, menthol or non-menthol are bad for you; really, really bad. But at least from your heart’s point of view, menthol ones are twice as bad.