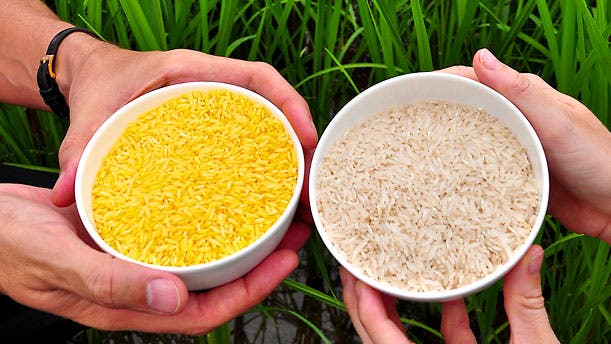 Recently, the highly controversial “golden rice” – a genetically modified rice that also contains vitamin A – has been approved in the Philippines after much heated debates and a slew of barrages imposed by anti-GMO organizations. It is believed worldwide 250,000-500,000 children go blind each year, with half of these eventually dying within a year, due to vitamin A deficiency.

Scientists have for years been developing new genetically modified strains of various crops in order to enhance resistance to pests, increase yields, adjust taste and so on. Not all products have been seen well by the general public and there’s a certain scrutiny overlooking anything labeled as GMO. If this is a right philosophy or not to undertake depends a lot on the actual GMO crop and the overseeing governmental authorities.

The genetically modified rice contains enhanced levels of beta carotene, an important source of vitamin A. It first made the news some time in 2000, when Time Magazine featured it in a column highlighting it as the crop that might save the lives of millions of children. Since then, however, the crop’s installment on the fields reached a stalemate that lasted for 12 years; not out of scientific scrutiny, but because of international pressure. A number of anti-GM campaigns, most notably from Greenpeace, has blocked the introduction of golden rice in the farm lands and, consequently, in the homes of people suffering from a vitamin A deficiency. It’s estimated that some eight million children have died in the past 12 years since golden rice has been blocked due to vitamin A deficiency.

Anti-GM organizations have been fighting golden rice for a number of reasons, mostly because golden rice is inadequately described in terms of biological and biochemical makeup, has not been shown to be stable over time and because it initially wasn’t found to be very effective at carrying enough vitamin A. Apparently, in the initial golden rice strains a child had to eat “eat 15 pounds of cooked golden rice a day” to get enough vitamin A. With the new strain, however, according to two recent studies in the American Journal of Clinical Nutrition, only 50 grams (roughly two ounces) of golden rice can provide 60% of the recommended daily intake of vitamin A.

Some have argued that vitamin A deficiency can be battled through other methods, like supplementation and fortification. However, the logistic hurdles and the actual costs of such an operation seem rather … idealistic. Imagine, having vitamin A pills, supplements and the likes delivered to hundreds of thousands of people, most of which living in inaccessible rural areas – not going to happen. Supplementation programs costs $4,300 for every life saved in India, whereas fortification programs cost about $2,700 for each life saved. On the other hand, golden rice would cost just $100 for every life saved from vitamin A deficiency, and besides it can be grown by the local community, according to Bjørn Lomborg.

After extensive fields tests by the International Rice Research Institute (IRRI) and the Philippine Rice Institute carried out in 2010 and 2011, golden rice has finally been approved in the Philippines, with Bangladesh and Indonesia soon to follow.

If you have the time, also please read this Forbes report on the subject.