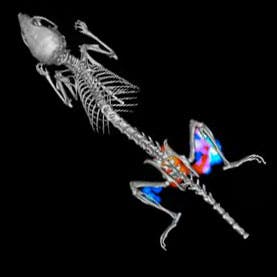 Despite advancements in technology and despite all the effort put in by doctors, bacteria often manage to sneak onto medical implants such as bone screws, where they cause severe, possibly life-threatening infections. A new research published in Nature Communications suggests using fluorescent antibiotics to reveal this type of infections before they become too severe.

As lead author Marleen van Oosten explained, it’s very hard to tell the difference between normal post-surgical swelling and an infection – the only way to do that is a biopsy, which is itself an invasive procedure. The microbiologist from the University of Groningen in the Netherlands stressed that such infections can become massive problems, potentially growing and developing for years before they are finally discovered.

To better spot microbes in the body, van Oosten and her colleagues coloured the antibiotic vancomycin with a fluorescent dye to help identify infected tissues. If the bacteria isn’t present, then nothing really happens, but if there is a bacterial infection, the drug inserts itself into the thick cell walls of bacteria, and with the addition of the fluorescent dye, it makes the cell walls glow.

Researchers infected mice with Staphylococcus aureus and then gave them a very small dose of the antibiotic to them – enough to make the bacteria glow when viewed under a fluorescent microscope, but not enough to kill them. They then implanted metal plates coated with the fluorescent antibiotic into the shin bone of a human cadaver, 8 millimetres below the skin. Some of the plates had been covered with Staphylococcus epidermidis, a bacterium that grows on human skin. They could easily observe the plates glowing with a camera that detects fluorescence.

Niren Murthy, a biomedical engineer at the University of California, Berkeley is a supporter of this method, explaining that a method of detecting bacterial infections is badly needed. But he also points out a potential problem – will the fluorescent molecules be strong enough to be seen if there are is a small, incipient number of bacteria in the human body ?

Van Oosten is optimistic, and he believes that in the near future, this technique will be easily available for humans.