by Mihai Andrei
in Environmental Issues, Genetics
A A 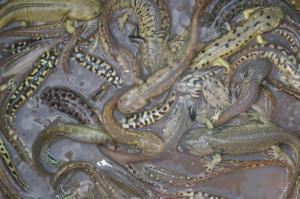 So a new study conducted by UC Davis research revealed interesting things from interbred salamanders, results that go against what was the dominant idea about interbread species.

The salamander experts studied the survival rates and genetic makeup of three types of salamanders: native California tiger salamanders (Ambystoma californiense), which are protected under the U.S. Endangered Species Act; barred tiger salamanders that were introduced in California from Texas in the 1950s (Ambystoma tigrinum mavortium); and the hybrid offspring born when the two species mated. They found that hybrids did better when released into their habitat than the natural species. The belief was that hybrids are not as fit as their parents and they are weaker.

But hybrids favour natural selection and this may be an answer for the salamander endagered population. Some think that they are just threats to the native salamanders (awesome salamander here). But this is a thing to look to in the future since it is harder and harder for numerous species with the dissapearance of their habitat.

It is bad that people consider hybrids to be less valuable than the so called pure species. We find it very easy to forget where we came from and how the human species evolved from microscopic ancestors and later from larger creatures thanks to endless interbreeds. People should understand that hybrids exist and they are part of natural selection and they should be regarded as beings, equal to and just as valuable as “pure breeds”.