by Mihai Andrei
in Genetics, Research, Studies
A A 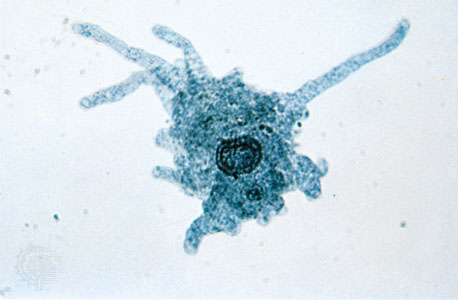 Intelligence is very hard to define as a trait, as it’s usually a simplified term used to describe a quantum of related abilities, such as the ability to solve problems, to understand abstract issues, to learn and to plan. But the notion of intelligence should (by any means) be understood at a whole new level, even different than that of human intelligence.

For example, if anybody claimed that amoebas have the slightest trace of intelligence, even a primitive one, the first reaction would be to laugh in the man’s face; and that would be very wrong. Because amoebas are more intelligent than they seem to be at a first glance. A team of US physicists built a simple electronic circuit that helped define how amoebas “think”, and how they adapt.

In some previous studies, a team of Japanese scientists had shown that the Physarum amoeba adapts to shifts of temperature. It was well known that the cells tend to become more sluggish when it gets colder, but they showed that it slows down even in anticipation of cold conditions when there are no changes in the temperature. But what was even more intriguing about this was that despite the fact that the Physarum anticipated the cold spikes in the experiment, after a few repetitions they “learned” that the cold spike would not actually come and continued their existence as usual.

In the study conducted by the Americans, they pointed out to what could be a storage device. The amoebe contains a watery sol within a gel, which creates some low-viscosity channels which are grouped in a network. These channels adapt to the conditions of the moment, but they retain a certain memory of the previous conditions.

“It appears that our model describes pretty well the experiments on amoebas’ learning,” says Di Ventra. He cautions there is a huge gap between the cognitive abilities of single-celled animals and those of developed species, but adds there is no doubt that a combined set of simple circuit models will have more complex behaviour. “This is in fact what we are now interested in studying,” he says.