by Mihai Andrei
in Animals, Genetics
Reading Time: 3 mins read
A A
Share on FacebookShare on TwitterSubmit to Reddit

Single cell amoebae can remember, make decisions and anticipate change, urging researchers to redefine what we perceive as intelligence as soon as possible.

For gardeners, they are usually a pest, for some hikers, a nice view, and for researchers, they are protists, a taxonomic group reserved for “everything we don’t really understand,” says Chris Reid of the University of Sydney. The big mystery here comes from the fact that slime molds are much more intelligent than they seem at a first glance.

As we told you in a previous article, these creatures can navigate using external memory, despite having no brain. Particularly one species, yellow Physarum polycephalum, can solve mazes, mimic the layout of man-made transportation networks and choose the healthiest food from a diverse menu – again, all of this without a nervous system.

The maze solving was just the first sign of intelligence, basically ringing a bell that something’s really going on down in slime. But then researchers did something way different: they placed food in the relative positions of the major cities and urban areas, the slime accurately recreated the railway of Tokyo, as well as the major railways of England, Canada, Spain and Portugal. The cell solved a real world problem which took teams of engineers and urban planners to solve – making scientists believe that with further studies, the slime could have some real life problem solving importance.

But P. polycephalum is not only a great navigator and good forward thinker, but it’s also a healthy eater. Their ideal diet comprises of two thirds protein and one third carbohydrates. Audrey Dussutour of the University of Paul Sabatier in France placed slime molds in the center of a clock face of 11 different pieces of food, each with a distinct ratio of nutrients. Almost every time the slime would go for the optimal diet – something you can’t say for most people today. 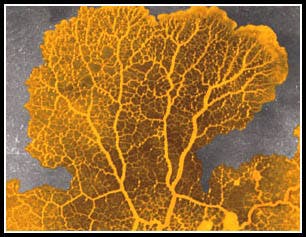 So how do they do it? How do they memorize, how to they analyze the nutrient ratio, how to they find the optimal solution to a presented problem? Well… we don’t know. Several hypotheses have been proposed, but none has solid evidence to back it up. But slime molds are definitely magnificent creatures; they evolved somewhere between 600 million years ago and one billion years – no organisms had nervous systems then, yet they found a way to memorize, analyze and predict – they found a successful and admirable alternative to convoluted brain centered intelligence; one could say they break the mold.