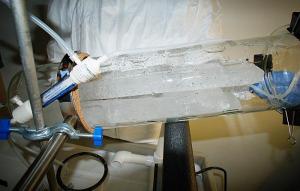 Scientists from the University of Delaware and the University of California at Riverside have thawed ice estimated to be at least a million years old from above Lake Vostok (update – first samples taken from lake Vostok). This lake is hidden more than two miles beneath the frozen surface of Antarctica and has been

This was published by the University of Delaware. Their website is filled with interesting studies, so it’s very well worth taking a loook. Researchers are trying to find out how these living “time capsules” survived the ages in total darkness, in freezing cold and without food and energy from the sun. They are using some genomic techniques which they hope are going to provide insight into how organisms adapted to live in extreme environments.

“It’s some of the coolest stuff I have ever worked on,” said Craig Cary, professor of marine biosciences at UD. “We are going to gain access to the genetics of organisms isolated for possibly as long as 15 million years.”

The ice was reported to be incredibly clear and glasslike, reflecting the light just as a prism would. The segments were then cut from an 11,866-foot ice core drilled in 1998 through a joint effort involving Russia, France and the United States. The core was taken from approximately two miles below the surface of Antarctica and 656 feet (200 meters) above the surface of Lake Vostok and has since been stored at -35 degrees C at the National Ice Core Laboratory in Denver.

“This ice was once water in the lake that refroze onto the bottom of the ice sheet,” Cary explained. “We have no direct samples of the lake itself, only this indirect sampling of the refrozen ice above it because drilling into the lake without taking extensive precautions could lead to the lake’s contamination. The borehole made to collect the ice is filled with a mixture of jet fuel, kerosene, and CFCs to keep it from closing,” Cary noted. “Since the lake has not had direct contact with the surface world for at least 15 million years, this would be a contamination of one of the most pristine environments on Earth,” he said.

He then said that this procedure is very delicate, requiring an isolation chamber for the actual melting and numerous measures need to be taken for this procedure to go as it should. Other researches have showed that there are microorganisms living in the Vostok water but they were not able to show how these little one-celled organisms have become adapted to an environment that is eternally dark, cold and so isolated that food and energy sources are likely rare and hard to come by. The water has about 10-100 microbes per milliliter which is fascinating as most lakes have approximately 1 million microbes per milliliter.