Nobody’s perfect: we all carry genetic variants that may cause diseases

by Tibi Puiu
in Diseases, Genetics, Research
Reading Time: 3 mins read
A A
Share on FacebookShare on TwitterSubmit to Reddit

For the first time ever, researchers at at Cambridge and Cardiff, have identified and compiled a list of damaging or disease associated DNA variants in the human genome. The researchers found that an average healthy individual carries 400 potentially damaging DNA variants. Most such variants should be found as genetic research provides more refined results. 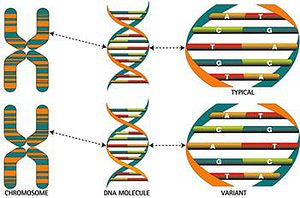 Scientists have known for a long time that each of us carries genetic variants that when exposed to certain “ideal” conditions cause various illnesses. This is the first time however that researchers have been able to quantify how many such variants each of us has, and list them.

“For over half a century, medical geneticists have wanted to establish the magnitude of the damage caused by harmful variants in our genomes,” says Dr Yali Xue, lead author from the Wellcome Trust Sanger Institute. “Our study finally brings us closer to understanding the extent of these damaging mutations.”

“We measured the number of potentially damaging variants in the genomes of apparently normal healthy humans by comparing two different datasets: whole genome sequences from 179 people in the 1000 Genomes Pilot Project, who were unlikely to have any overt genetic disease at the time of sampling, and information from the Human Gene Mutation Database (HGMD), a detailed catalogue of human disease-causing mutations that have been reported in the scientific literature.”

Don’t look so alarmed, though. Most of these disease or damaged variants were single, ‘recessive’ genetic variants that typically do not cause harm to the carrier. These genes end up to cause the illness they’ve been programmed to carry when two copies – one in each chromosome – are present or if the variant is dominant. Dominant disease genetic variants can give rise to a disease trait when even a single copy is present. The researchers claim one in ten people studied is expected to develop a genetic disease as a consequence of carrying these variants, either because they carry two copies or they have dominant variant.

Specifically, the researchers showed that each individual carried 281–515 missense substitutions, 40–85 of which were homozygous, predicted to be highly damaging. They also carried 40–110 variants classified by the HGMD as disease-causing mutations (DMs), 3–24 variants in the homozygous state, and many polymorphisms putatively associated with disease.

“In the majority of people we found to have a potential disease-causing mutation, the genetic condition is actually quite mild, or would only become apparent in the later decades of life,” says Professor David Cooper, lead author of the study from Cardiff University. “We now know that normal healthy people can possess many damaged or even completely inactivated proteins without any noticeable impact on their health. It is extremely difficult to predict the clinical consequences of a given genetic variant, but databases such as HGMD promise to come into their own as we enter the new era of personalized medicine.”

Findings were reported in the American Journal of Human Genetics.