by Mihai Andrei
in Genetics
Reading Time: 2 mins read
A A
Share on FacebookShare on TwitterSubmit to Reddit

First of all, I hope you’re having a great Summer so far, and I apologize for my leap of absence – I’ve been missing you guys. 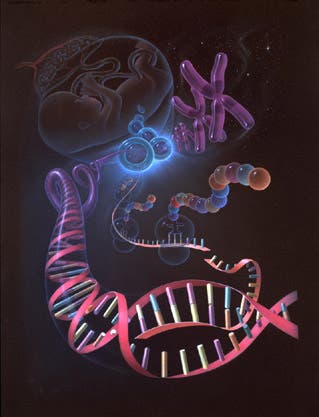 If you want to know the history of your ancestors, you don’t have to look any further than your own body. As it turns out, your own genome carries a one million year old record of your past, going much more into the past than human history.

It has already been known that this record can stretch up to 200.000 years in the past, up to the point where all humans alive today shared a common female ancestor (definitely something to think about, if you ask me), due to the fact that mitochondrial DNA passes down from mother to child.

However, Richard Durbin of the Wellcome Trust Sanger Institute in Cambridge, UK, and Heng Li at the Broad Institute in Cambridge, Massachusetts managed to go down the road of time five times longer by reading only a single genome, by taking advantage of the numerous advancements that have been done in the study of DNA. Thus, they were able to how how alleles (the inherited genes from our parents) differ within a genome.

So by ‘reading’ thousands of alleles and estimating the mutation rate, they can work out when each pair of allele were separated and calculate past population sizes. In order to conduct their studies, they analyzed seven complete sequences: one each from China and Korea, three of European origin and two from west Africa. They concluded that somewhere between 10.000 and 60.000 years ago, populations from both Europe and China suffered a drastic bottleneck, while the same effect was much milder in Africa.

“The idea that each human genome contains information about the history of its ancestors’ population size has been known theoretically, but we have never had the data or methods to pull out that information until now,” says John Novembre of the University of California, Los Angeles.

This method seems to be so effective, that researchers from all over the world are impressed by it. Ryan Gutenkunst of the University of Arizona in Tucson is one of them:

“The method is really spectacular. Previous methods have taken averages across the genome, but here they are looking at variation from one location to another location and getting good results from even a single individual.”