Defecating outside comes at a great toll to the numerous, and often crowded Indian people. Lack of basic hygiene means hundreds of millions are exposed to bacterial pathogens and children are at the mercy of diarrhea. Economically speaking, this translated to $53.8 billion or 6.4 percent from India’s gross domestic product in 2006, says the World Bank.

Defecating outside comes at a great toll to the numerous, and often crowded Indian people. Lack of basic hygiene means hundreds of millions are exposed to bacterial pathogens and children are at the mercy of diarrhea. Economically speaking, this translated to  $53.8 billion or 6.4 percent from India’s gross domestic product in 2006, says the World Bank.

Of course India isn’t alone. ZME Science reported earlier how 2.4 billion people lack access to flushing toilets. This might seem heartbreaking, but considering it used to be much worse, you can see this as good news.  Some 2.6 billion people received improved access to hygienic toilets since 1990, and the UN says all people in the world should be provided for by 2030. Until then, though, the Indian government should better make some progress, and fast. If not for their people’s sake, at least do it to rise the GDP which politicians always taunt around. In fact, the country hasn’t done that bad having installed hundreds of millions of toilets in the past decade, but it’s still not sufficient. Eighteen percent of India’s urban population and 69 percent of rural dwellers defecate daily in fields, bushes, open spaces, wherever. That’s roughly 640 million people. 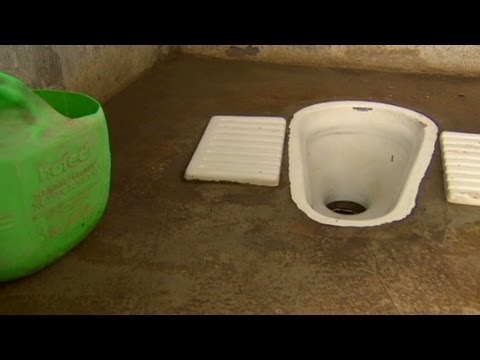 The World Bank’s Water and Sanitation Program found India’s inferred cost due to lack of flushing toilets is the biggest in Asia, which says a lot. Inadequate collection and transfer of feces costs India $48 per person. In Vietnam this comes at $9.30 per person,  $16.80 in the Philippines, $28.60 in Indonesia and $32.40 in Cambodia. Some other disturbing findings:

You might think installing toilets would make things better. Reality is a bit different since there are social norms that come in the way of proper sanitation. Despite having flushing toilets at home, a lot of Indians prefer to defecate outside. Then, there’s the problem of sewage treatment. More than 97% of all Indian towns and cities lack proper sewage treatment, so all that poop ends up aquifers and the water supply, which would be much worse than defecating in latrines or anywhere outside. It’s definitely a huge problem, and India needs to rise to the challenge. Before that happens, a shift in mindset needs to happen. Take Mumbai, for instance, where the municipality installed 10,381 public toilets. However, only a third of these are for women, and moreover you have to pay to use them. For men, it’s all free. What chances to these people have in these conditions? Luckily, there are some progressive minds that want to lift their country out of all this filth. India’s rural development minister, Jairam Ramesh, has backed a “no toilet, no bride” campaign to shame men into building latrines. One district recently required potential grooms to pose beside their toilets as a precondition for marriage registration. Another stopped payments to 21 principals whose school toilets didn’t pass muster.