Breakfast sandwich? The effects are felt before lunch

An increasing number of people are starting to take their breakfast in the form of a sandwich, be it pork roll, bacon and eggs, sausage, or even a hamburger. While tasty and full of energy, this breakfast is a ticking bomb for your body, a tremendous amount of fat which makes your body very unhappy. 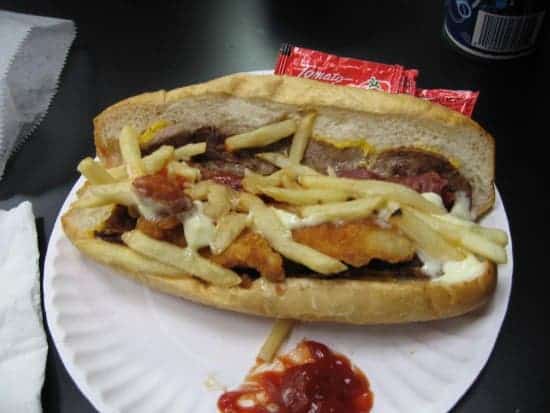 According to the head of cardiac science at the University of Calgary, eating just one of these a day almost certainly leads to atherosclerosis, the narrowing of the arteries over a lifetime and a huge number of associated risks. But a new research concluded that aside from the long term risks, the ill effects of a high fat breakfast are felt even before lunch time.

Experiments were set up in the laboratory of Dr. Todd Anderson, director of the Libin Cardiovascular Institute of Alberta and head of cardiac science at the University of Calgary and were led by a student researcher, Vincent Lee. Tested subjects were healthy, non-smoking college students (who else?). The purpose was to test the “happiness” of the arteries – the increase in blood flow through the arm in response to a brief interruption of blood flow; this increased is called Velocity Time Integral (VTI).

“VTI tells us how much blood flow you can you get in your arm,” says Dr. Anderson. Simply put, the higher the VTI, the happier the artery.

The idea was to see just how much one single high fat breakfast affects the human body. They tested the students twice – once on the day they ate the sandwich, and once when they ate nothing at all for breakfast. There wasn’t a special type of sandwich, just something you typically find in a supermarket or a fast food – some 900 calorie, 50 grams of fat sandwiches. Their VTI was examined two hours after eating and it showed a decrease of 15-20% after eating the sandwich, highlighting the speed at which fatty foods can damage the body. The increase however, wasn’t long lived – meaning you shouldn’t say never to your guilty pleasure, just avoid it as much as possible.

“This study reminds us that our behaviours are the backbone of preventing heart disease,” says Heart and Stroke Foundation spokesperson Dr. Beth Abramson. “Remember that whether you eat at home or go to a restaurant, you’re still in charge of what you eat. So consider all the choices, and try to cut down on saturated and trans fats, calories and sodium. That’s one of the keys to decrease your risk of heart disease and stroke.”