The more you sit, the more likely you are to suffer chronic diseases

by Mihai Andrei
in Diseases
Reading Time: 2 mins read
A A
Share on FacebookShare on TwitterSubmit to Reddit

Kansas State University researcher Richard Rosenkranz, assistant professor of human nutrition concluded that there is a direct connection between how much you sit and how likely you are to suffer chronic diseases; he conducted the study on middle-aged Australian males and published it in the International Journal of Behavioral Nutrition and Physical Activity. 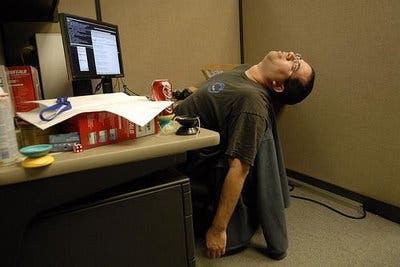 He worked with University of Western Sydney researchers Emma George and Gregory Kolt and studied 63,048 males ages 45-65 from the Australian state of New South Wales. Study particpants were asked to state on average, how much they sit down and what (if any) chronic diseases they suffer from. Compared with those who reported sitting four hours or less per day, those who sat for more than four hours per day were significantly more likely to report having a chronic disease such as cancer, diabetes, heart disease and high blood pressure. Those sitting down for more than 6 hours had a much higher chance.

“We saw a steady stair-step increase in risk of chronic diseases the more participants sat,” Rosenkranz said. “The group sitting more than eight hours clearly had the highest risk.”

The study is extremely relevant for those who have long desk jobs, as well as truck drivers and other driving-related workers.

“We know that with very high confidence that more physically active people do better with regard to chronic disease compared with less physically active people, but we should also be looking at reducing sitting,” Rosenkranz said. “A lot of office jobs that require long periods of sitting may be hazardous to your health because of inactivity and the low levels of energy expenditure.”

It may be simple, and you’ve probably heard it several times, but if there’s any conclusion that can be drawn for the study, it’s pretty simple: exercise more, sit down less; odds are, it will do wonders for your health.

“It’s not just that people aren’t getting enough physical activity, but it’s that they’re also sitting too much,” he said. “And on top of that, the more you sit, the less time you have for physical activity.”