by Mihai Andrei
in Anthropology, Diseases
Reading Time: 3 mins read
A A
Share on FacebookShare on TwitterSubmit to Reddit

You’d be tempted to think that clogged arteries are a problem of the modern world, with all the lack of exercise and unhealthy eating; but as ancient mummies revealed, even when we were hunter-gatherers, people still had arterial issues.

“There’s a belief that if we go back in time, everything’s going to be OK,” says cardiologist Greg Thomas of the University of California, Irvine, a senior member of the study team. “But these mummies still have coronary artery disease.” The paper is published in the current issue of The Lancet.

A lack of exercise and a diet rich in saturated fat — both of which increase levels of ‘bad’ cholesterol in the blood — are thought to increase the risk of plaque building up. These plaques are made up of cholesterol and immune cells called macrophages that can build up in arterial wall arteries. If this happens, the risk of heart attack and other cardiovascular diseases increases dramatically.

Thomas and his colleagues performed CT scans on 137 mummies from four very different ancient populations: Egyptian, Peruvian, the Ancestral Puebloans of southwest America and the Unangans of the Aleutian Islands in Alaska. Egyptian mummies were artificially embalmed, while the other ones were simply well preserved by very dry or cold conditions. 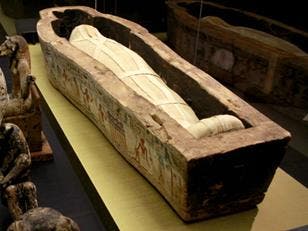 The four groups studied did not only live in very different areas, but they also had very different lifestyles. Ancestral Puebloans were forager–farmers, while Unangans were hunter–gatherers with an exclusively marine diet. Researchers were searching for calcified plaques in the wall of an artery or along the expected course of an artery. They successfully identified atherosclerosis in 47 (34%) of the 137 mummies, and in all four populations, ranging from 25% of the 51 ancient Peruvians to 60% of the five Unangans.

What’s extremely interesting about that is that the disease levels are about as big as modern ones, which comes as a big shock. However, despite the fact that elite people then ate a diet that resembles that of today’s gluttons, the cause for the disease may be different:

“Now we’ve scanned the common man and woman and they’ve got the same disease,” says Thomas. Rather than excess cholesterol, he suggests that high levels of inflammation — caused by smoke inhalation or chronic infection, for instance — may have triggered the disease in these individuals.

“We’ve oversold the ability to stop heart disease,” he says. “We can slow it down, but to think we can prevent it is unrealistic.”