So, you think you can crack actual medical mysteries? Here’s where you can try it

by Mihai Andrei
in Health & Medicine, News, Technology
Reading Time: 4 mins read
A A
Share on FacebookShare on TwitterSubmit to Reddit

A startup will allow voluntary internet detectives to study unusual medical cases and attempt to solve them. Millions of people suffer from rare or complex medical conditions for which they have received no diagnosis, but where a handful of doctors have failed, the collective force of the internet can do it – we can do it. 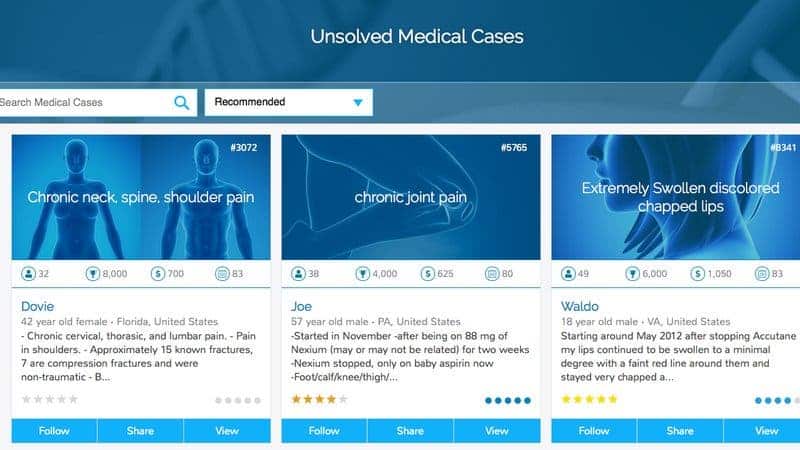 In 2003, Jared Heyman’s sister went through an excruciating period – without an apparent cause, she developed a rash, fell into a deep depression, slept for 14 hours a day, gained 50 pounds, had a cold sweat, and no one knew why.

“Over the next several years, our parents brought Carly to 16 different medical specialists and racked up over $100,000 in medical bills, desperately seeking a diagnosis. Each doctor would treat her symptoms as best they could, but none could identify the root cause of her illness,” says Heyman. It was a medical mystery.

Needless to say, the entire family was devastated, and it wasn’t until she got checked by an interdisciplinary team at the NIH Undiagnosed Disease Program in Bethesda, Maryland, that she finally received a diagnosis. She had fragile X-associated primary ovarian insufficiency, a deficiency which affects 1 in 15,000 people. After the diagnosis was given, Heyman, a tech veteran, took a step back and looked at the grand scheme of things: many people suffer from such issues and have not been given a diagnosis; on the other hand, many capable people from around the world could help them understand the condition. He wanted to change all this.

So together with developer Axel Setyanto and designer Jessica Greenwalt, he co-founded CrowdMed, a website where anyone can post their medical conundrums, and anyone can help solve the mystery. It’s basically the crowdsourcing version of Doctor House… except without a Doctor House. As a matter of fact, the “House MD” syndrome is causing significant damage, Heyman says.

“The problem with our medical culture today is what I call the ‘Dr. House Paradigm’—this notion that any medical mystery can be solved by a lone genius, working in isolation, if only we can find him. It’s a paternalist paradigm that gives us great comfort emotionally, but it’s simply untrue. The truth is that no doctor, no matter how brilliant, can keep up with the vast amount of medical knowledge that exists today. Unfortunately, Dr. House is a fictional character.

However, there’s a phenomenon called ‘the wisdom of crowds,’ which shows that large and intellectually-diverse crowds tend to be much smarter than even the smartest individual experts in the world, as long as the right mechanism is in place to aggregate their collective intelligence. We developed CrowdMed to be the optimal mechanism for crowdsourcing medical answers.”

You can post your own mystery for $50 and you fill out a basic questionnaire. User information is kept anonymous. This $50 is refunded after the patient completes the whole process so the service is basically free and everyone can get involved – even people with no medical training might have something to offer, through internet research. This article details the experience of someone who became a detective doctor. 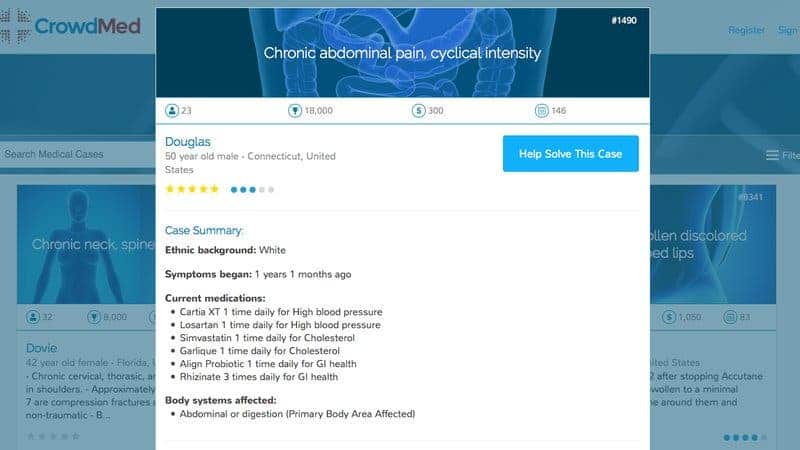 By now, you’re probably skeptical, and you should be! I mean, having people on the internet solve medical problems, that sounds like a recipe for disaster, right? I too was extremely skeptical of the success rate. But according to the company, they’ve already solved 1,000 cases with a 70 percent success rate, for patients who on average had been sick for 8 years, seen 8 doctors and incurred over $60,000 in medical expenses before submitting a case. The average case resolution time is 2 months and the cost is less $500. Patients can also choose to donate $200 (or more) to their medical detectives, and they usually do.

In other words, for $50, they’ve helped people with rare diseases who had been going from doctor to doctor finally get an answer, at an incredible success rate – 70% is simply stunning! But they believe there’s a good reason why this works so well.

“There are over 7,000 rare diseases, and it’s impossible for any one expert to be familiar with all of them. However, the collective intelligence of a crowd is virtually unlimited. This is why CrowdMed has a 70 percent success rate solving challenging cases that the medical system could not, and 95 percent of our final diagnoses have come up only once or twice ever on the site, which illustrates how rare and obscure these diagnoses are,” Heyman explained.

Still, there is some criticism to this concept. Numerous viewers of CrowdMed have commented that medical information has no place in crowdsourcing, and this shouldn’t be legal. Others believe that a site like CrowdMed gives too much freedom to users by allowing them to submit any type of treatment suggestion, which can be counterproductive. Posting outrageous medical advice can convince a patient to do something a doctor would not advise.

Still, it’s an interesting concept, and one that might grow and develop in years to come. What do you think – should medicine also be crowdsourced, or is this simply tabu – and you shouldn’t cross this line, ever? Leave your opinion in the comment section.