Woman’s runny nose lasted for two years, turns out it was a freaking brain fluid leak

She spent a lot of money on tissues... 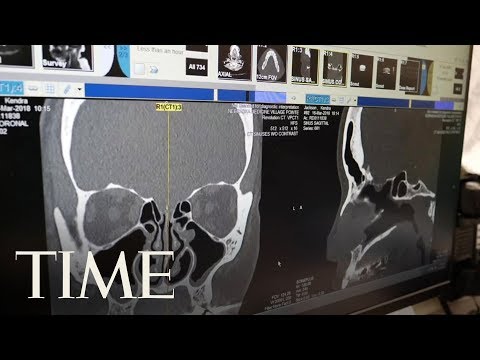 A Nebraska woman with a constantly runny nose learned that the leak originated way upstairs. As it turns out, her skull had been leaking cerebrospinal fluid (CSF) for about two years. Luckily, doctors were able to eventually spot the problem and plug the dribble.

The woman was losing half a liter of fluid a day

Kendra Jackson had gotten into a car accident in 2013 that injured her head. Although her bruises went away, the 52-year-old woman’s nose suddenly started running profusely two and a half years after the accident, typically just one nostril at a time. She also started to regularly cough and sneeze — it was like she permanently had a cold. Each day, her nose would run about a half-pint of fluid, so everywhere she went, Jackson carried a box of tissues around and always stuffed in her pockets.

At first, doctors thought she was suffering from congestion, allergies, or the common cold. But as the runny nose continued, it soon became clear there was something strange going on.

“They prescribed every kind of medicine you can think of, and my nose just kept on running,” Jackson told CNN.

CSF is the colorless liquid that surrounds the brain and spinal cord to cushion them against any kind of trauma. Without CSF, our squishy, soft brain wouldn’t last long in the presence of the constant friction with the rigid interior of the skull. The fluid also helps to remove waste products from the brain and distribute nutrients and other substances throughout the central nervous system.

Cerebrospinal fluid is produced continuously in the brain and usually gets absorbed into the bloodstream through protrusions in the outer membrane of the brain, called the dura mater. However, in Jackson’s case, banging her head against the car’s dashboard caused a tiny hole to form in her cribriform plate — a fragile bone that separates the cranial and nasal cavities, and which is thinner than a potato chip. This allowed the fluid to drip into her nose and mouth.

Only five in 100,000 individuals worldwide every year actually suffer from cerebrospinal fluid leaks. Depending on the amount of fluid lost, such leaks can be life-threatening and place the patient at an increased risk of infections such as meningitis. Fortunately, in April, doctors performed a surgery that plugged the hole in Jackson’s skull using tissue from her nose and abdomen.

It all ended well for Jackson but the woman is pleading others who may be experiencing the same symptoms to visit a doctor as early as possible.

“For people who hear my story, if they’re tasting a very salty taste and something’s draining in the back of your throat, it’s probably something other than allergies. So get to the doctor.”