by Mihai Andrei
in Health & Medicine, Mind & Brain
Reading Time: 3 mins read
A A
Share on FacebookShare on TwitterSubmit to Reddit

The first study of this kind concluded that the very early musical training of children, even before they can walk, has some remarkable benefits.

Researchers at the McMaster University found that one year babies who participate in interactive music classes are happier, communicate better and have earlier and more sophisticated brain responses to music.

“Many past studies of musical training have focused on older children,” says Laurel Trainor, director of the McMaster Institute for Music and the Mind. “Our results suggest that the infant brain might be particularly plastic with regard to musical exposure.” 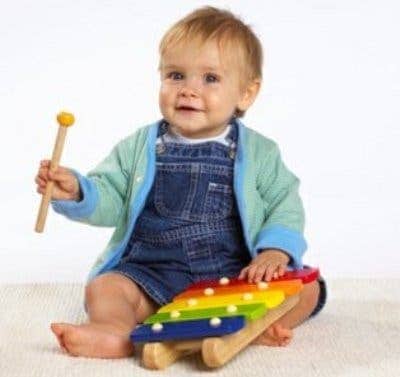 Trainor, along with David Gerry, a music educator and graduate student, received an award from the Grammy Foundation in 2008 to study the effects of musical training in infancy. In this latest study, the children participated in one or two different types of weekly music instruction; one class involved learning a small set of lullabies and simple songs, working together to play percussion instruments and taking turns to sing specific songs. By learning the drums in some fashion, the children were building a stronger hand-eye coordination and making greater connections within their brain. In the other one, infants and parents played at various toy stations while recordings from the popular “Baby Einstein” series played in the background. Before the study had started, all the babies had shown similar social and mental development and none of them had participated in any other baby music classes.

“Babies who participated in the interactive music classes with their parents showed earlier sensitivity to the pitch structure in music,” says Trainor. “Specifically, they preferred to listen to a version of a piano piece that stayed in key, versus a version that included out-of-key notes. Infants who participated in the passive listening classes did not show the same preferences. Even their brains responded to music differently. Infants from the interactive music classes showed larger and/or earlier brain responses to musical tones.”

Basically, babies learned how to tell good music from bad music, and their brains developed significantly in the process. But the non-musical differences were even more significant, researchers explain.

Babies from the interactive classes showed better early communication skills, like waving goodbye, or pointing towards objects; they were also much more receptive to external stimuli, seemed happier, smiled more and calmed easier when things were unfamiliar or unpleasant. Of course, the results are slightly subjective and there are many factors which have to be taken into consideration here, but the bottom line is the differences were too obvious to dismiss. If you ask me, it will only take a few years until people already start using these methods.

“There are many ways that parents can connect with their babies,” says study coordinator Andrea Unrau. “The great thing about music is, everyone loves it and everyone can learn simple interactive musical games together.”