For infertile women everywhere, regardless of age, health and status, one thing was sure – they were never going to have children; and I say ‘were’ because now we have a precedent, a way through which that can be changed: an infertile Australian woman is now pregnant after growing new eggs in ovarian tissue transplanted into her abdomen in a world first. Doctors believe this treatment has the potential to revolutionise fertility treatment.

The woman (Vali), is nearly 26 weeks pregnant with twins after previously being rendered infertile by treatment for ovarian cancer. But a team of doctors from Melbourne IVF and The Royal Women’s Hospital managed to help the woman grow egg follicles and produce not one, but two healthy eggs after transplanting her own frozen ovarian tissue into her abdomen. 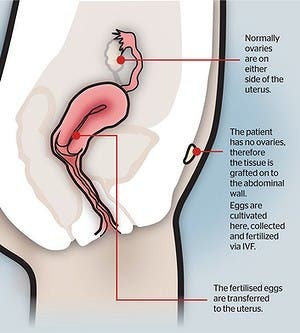 Just over 20 babies have been born in the world after ovarian tissue transplant, but this is the first time when the tissue has been successfully transplanted at an entirely different site in the body to where it was taken from. The team now plans to develop a new emergency center, where women suffering from affections which might render them infertile can store their tissue samples, should they want to become pregnant. They have already stored over 300 samples.

“It makes me quite convinced that the optimal way for preserving fertility will be taking ovarian tissue,” said Gab Kovacs, the international medical director of Monash IVF, which did the first successful Australian ovarian tissue transplant. “If I had a patient who was going to lose their fertility to cancer treatment I would offer it from now on”.

Hopefully, Vali and her children will grow healthy and very happy together – and she will be only the first in a long list of previously infertile women which give birth.