by Mihai Andrei
in World Problems
Reading Time: 1 min read
A A
Share on FacebookShare on TwitterSubmit to Reddit

According to a new research, the ozone layer has hit a new record low – but this is not necessarily a good thing. 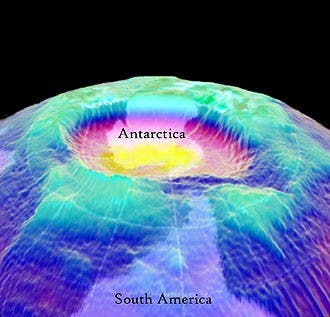 It is actually believed that hotter temperatures help the layer, and record high temperatures brought the hole to the lowest size observed in the past decades. The hole, located above the Antarctic shrunk from 29.9 million square kilometers to 21.2 square kilometers since 2000; it still covers an area about as big as the entire North America.

While ozone itself is considered to be a pollutant in the low atmosphere, the layer it creates is absolutely vital for life on our planet to survive – it protects us from devastating UV rays.

Years ago, it was discovered that a giant hole was appearing above the Antarctic, caused by chlorine in the atmosphere that comes from chlorofluorocarbons (CFCs). CFCs are man made chemicals that were used in various products, including spray cans. Other, smaller holes appeared in other parts of the world, but this one is by far the most significant. CFC production has been banned for 20 years, but the recovery is very, very slow.