Fossil fuels are subsidized by $14.5 billion a day

A shocking conclusion came from an International Monetary Fund report: they found that fossil fuels will be subsidized by a whopping $5.3 trillion dollars, way more than total health spendings of the entire world combined.

by Mihai Andrei
in News, Renewable Energy, World Problems
Reading Time: 5 mins read
A A
Share on FacebookShare on TwitterSubmit to Reddit

A shocking conclusion came from an International Monetary Fund report: they found that fossil fuels are subsidized by a whopping $5.3 trillion dollars a year (2015), more than total health spendings of the entire world combined and 6.5% of the total global GDP.

Energy subsidies are a hot topic nowadays, with many people blaming governments for maintaining subsidies for inefficient and polluting technologies. A subsidy is a form of financial aid or support extended to an economic sector with the aim of promoting economic or social policy. The IMF conducted a ‘comprehensive’ look on all types of global subsidies given to the fossil fuel industry.

“This paper provides a comprehensive, updated picture of energy subsidies at the global and regional levels. It focuses on the broad notion of post-tax energy subsidies, which arise when consumer prices are below supply costs plus a tax to reflect environmental damage and an additional tax applied to all consumption goods to raise government revenues,” the report reads.

This analysis casts a lot of doubt on the idea of fossil fuel cheapness – if there are so many hidden costs, are they actually cheap? Compared with the subsidies that renewables get (an estimated $120 billion a year), $5.3 trillion is grotesque. Is this really a reasonable way to spend government money?

Furthermore, as the IMF points out, these subsidies primarily reflect underpricing from a domestic (rather than global) perspective; in other words, it’s these subsidies that help keep the oil price artificially low.

Much of that sum comes from polluters not being forced to pay for burning coal, oil and gas. Most governments demand a pollution tax, but the oil and gas industry is often subsidized and not required to pay this tax, despite the damage they are doing both at a local and on a global level.

Nicholas Stern, an eminent climate economist at the London School of Economics believes this is an aberration:

“This very important analysis shatters the myth that fossil fuels are cheap by showing just how huge their real costs are. There is no justification for these enormous subsidies for fossil fuels, which distort markets and damages economies, particularly in poorer countries.”

Furthermore, Stern went on to say that the figure the IMF got is almost certainly an understatement:

“A more complete estimate of the costs due to climate change would show the implicit subsidies for fossil fuels are much bigger even than this report suggests.”

The UN’s Intergovernmental Panel on Climate Change also believes the real figure is greater than that. The IMF calculated this cost using an official US government estimate of $42 a tonne of CO2 (in 2015 dollars), a price “very likely to underestimate” the true cost, according to the IPCC.

But while Stern and the IPCC found the sum actually underwhelming, financial analysts were generally shocked to read the figures.

Even the people conducting the report couldn’t believe it.

David Coady, the IMF official in charge of the report, said: “When the [$5.3tn] number came out at first, we thought we had better double check this!” But the broad picture of huge global subsidies was “extremely robust”, he said. “It is the true cost associated with fossil fuel subsidies.”

A scale of reference 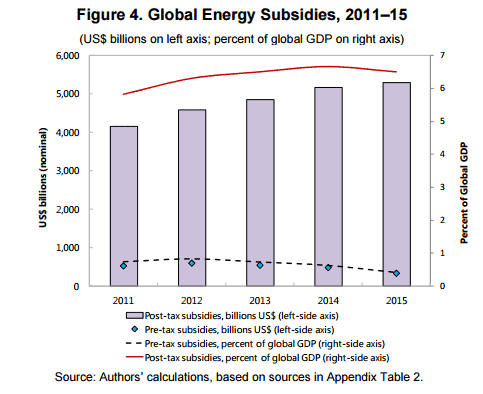 If you’re wondering just how much is $5.3 trillion, it’s 6.5% of global GDP. 6.5% of the entire world’s GDP goes into oil, gas and coal subsidies. Over half that amount goes to governments treating the victims of air pollution and the income lost because of ill health and premature fatalities.

In terms of climate change, the costs resulting from fossil fuel emissions account for subsidies of $1.27tn a year, about a quarter of the total, with coal having the most negative effects.

Of course, energy subsidies vary significantly from region to region and from country to country. For the total sum, China subsidizes fossil fuels the most, more than the US, the EU, Russia, India and Japan in total. But on the bright side, subsidy reforms are already underway in countries such as Egypt, Indonesia, Mexico, Morocco and Thailand. In India, subsidies for diesel ended in October 2014 – something which many claimed wasn’t possible.

So what would happen if we eliminated fossil fuels subsidies, or at least greatly reduced them? Well at a first glance, that wouldn’t be a good thing, because it would lead to increased energy prices, but then again, most of the subsidies go to the rich anyway. The 20% richest people get 6 times more subsidies than the 20% poorest people – so this would actually be an opportunity to reduce poverty by increased tax revenues to provide more adequate support.

Also, it would make renewables much more attractive – you don’t even need to subsidize renewables, just to stop subsidizing fossil fuels, and they would suddenly become much cheaper. That would benefit everybody.

“If we get the pricing of fossil fuels right, the argument for subsidies for renewable energy will disappear. Renewable energy would all of a sudden become a much more attractive option.”

But if we look a bit deeper, we’ll also see that much of the subsidies go towards discovering and exploring new reserves – and we don’t really want to explore new reserves, because that would ultimately lead to even more emissions and global warming. Shelagh Whitley, a subsidies expert at the Overseas Development Institute, said:

“The IMF report is yet another reminder that governments around the world are propping up a century-old energy model. Compounding the issue, our research shows that many of the energy subsidies highlighted by the IMF go toward finding new reserves of oil, gas and coal, which we know must be left in the ground if we are to avoid catastrophic, irreversible climate change.”

So greatly simplifying things, by reforming subsidies and redirecting, reducing or eliminating them we would add some additional taxes to the rich of the world and reduce the gargantuan profits of the (by far) most lucrative industry on the planet. But on the other hand, we would be conserving the Earth’s climate, reducing pollution, reducing massive health hazards, promoting sustainable energy sources and stimulating the development of the poorer people of the world… it almost sounds to good to be true. When you draw the line, every single nation would benefit from this at a local level, and we would all benefit from it at a global level. But don’t take it from me, take it from Gaspar himself:

“The icing on the cake is that the benefits from subsidy reform – for example, from reduced pollution – would overwhelmingly accrue to local populations,” he said. “By acting local, and in their own best interest, [nations] can contribute significantly to the solution of a global challenge,” said Gaspar. “The path forward is clear: act local, solve global.”

You can read the entire report here.