Using Farms to Produce Energy as well as Food

by Mihai Andrei
in Environment
Reading Time: 4 mins read
A A
Share on FacebookShare on TwitterSubmit to Reddit

Farms produce food to feed the urban population but with some relatively simple modifications they are capable of supplying significant amounts of energy to the urban areas as well. This is being done in several ways across the United States, but in all fairness, the US is lagging significantly behind even third world areas in doing this effectively. Better utilization of the resources provided by a large agricultural industry can help reduce greenhouse gasses and climate change, plus provide safe, reliable renewable energy. 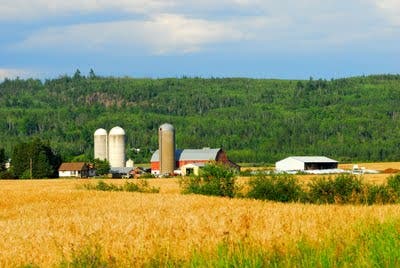 While there are several ways to take full advantage of the large open spaces that are typical of agricultural land (wind farms and space for solar panel arrays are being tentatively explored as well), one area that provides benefits on multiple levels is the collection of biogas methane that is a natural byproduct of livestock. The reason it is so promising is that it addresses the ability supply renewable energy, reduces runoff pollution from farming, and reduces greenhouse gasses all at the same time.

While those are the environmental benefits, the economic benefits to the agricultural sector can also be very substantial, allowing farms to sell energy in the form or either electricity or natural gas back to the utility companies, and the production of carbon certificates that can have significant monetary value when sold to other industries and would help reduce the reliance on federal farm subsidies. The production of biogases (primarily methane) is a natural result of the anaerobic digestion of plant or organic material. Whether this digestion takes place in a cow’s stomach or in a collection tank where manure is stored temporarily, the resultant gas is the same. The natural gas drilled for is virtually the same gas, it just originated from decomposition of plants and organic matter thousands of years ago and then trapped in the ground where we drill for it now. The difference is, when drilled for it is not renewable and fracking and other methods of drilling have a major detrimental environmental impact while collection from a farm is 100% renewable and produces tangible environmental benefits.

When waste from a farm is collected and small natural additives mixed in to add to the efficiency of the digestion process, the resultant gas can be collected and then either burned in a generator to produce electricity to be fed into the electric grid or remain as a gas and be fed into natural gas pipelines. This gas is going to come out anyway. If it is not collected, it is released in the form of nauseous gasses that cause the odor from fields when spread with manure as the manure breaks down and digest slowly on the ground. In addition to releasing the methane into the atmosphere when it breaks down in this manner (methane has 21x the effect on greenhouse gasses as carbon), it also causes runoff that can pollute water systems. When the methane is captured from a tank there is no greenhouse gasses released into the atmosphere (resulting in the credit certificates) and the remaining solid byproduct has little or no odor or runoff while completely retaining its organic fertilization properties.

These methods are used extensively in Mexico and Central/South American countries as the sale of the energy and carbon certificates results in greater profits to the farmer than the sale of milk and livestock in many cases. This is influenced in part by the fact the US did not sign onto the Kyoto Protocol so the certificates do not have the same value in the US as these other countries. In some areas, the certificates are valuable enough that investment companies actually purchase and install the required equipment simply for the rights to sell the certificates while the farmer receives free energy for farm use or to sell.

It is clear that if these methods are proven worldwide to be efficient enough to attract investors to pay for the upgrades, they are certainly practical enough for widespread use in the US as well. The hindrance in adaptation for the US is in part due to the fact we are not members of the Kyoto Protocol so the certificates have less value and the fact utility companies are reluctant to purchase the energy. The supply of this renewable low cost energy could have a substantial impact on the profits of local utilities that currently enjoy a virtual monopoly on the production and supply of gas and electricity. This has the effect of limiting the growth of this technology here to farms willing to invest in the equipment simply to supply their own energy needs.

While the support of conservation techniques like insulation and energy efficient windows helps reduce the overall consumption or energy in the urban areas, looking to the farms to supply some of the remaining energy requirements in an Earth friendly manner would be a huge step forward.