Where most people see a threat, a select few see the opportunity of a lifetime.

Wind power hasn’t worked that well in Japan but not gusts are lacking. On the contrary, the country of the rising sun is often bombarded with typhoons whose devastating force easily destroy wind turbine blades which are designed and rated to withstand much milder conditions, like those in Europe. At the same time, Japan needs to supplement its renewable energy mix if it’s ever to become free of fossil fuels. The 2011 Fukushima meltdown also made a dent in the public’s support for nuclear energy which means the shackles of carbon-intensive energy generation have grown harder to break.

One inventive Japanese named Atsushi Shimizu, isn’t deterred away by typhoons. Instead of a threat, he sees potential. It’s believed that the energy encased in a typhoon is equivalent to half of the world’s current electricity generation capacity. Harnessing the power of a single typhoon could provide enough energy to power Japan for 50 years.

To this end, Shimizu, who is the CEO of a green-tech company called Challenergy since 2013, has come up with a new turbine design that’s meant to withstand powerful and unpredictable forces of nature. Instead of the familiar rotor blades, the new turbine is essentially made up of three pillars rotating around a vertical axis. 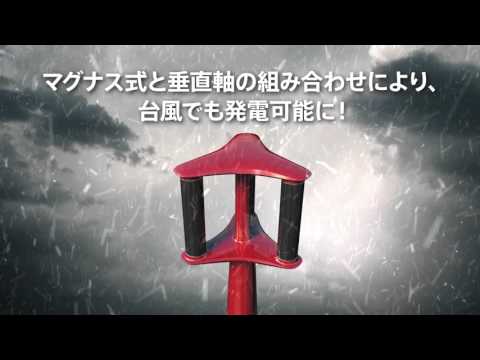 According to Shimizu, the design was modeled to take advantage of the Magnus effect, which is used to explain the often mysterious and commonly observed movements of spinning balls in sports like soccer, baseball tennis, table tennis, volleyball, golf and cricket. Basically, the Magnus effect explains why a spinning ball curves rather than follow a straight trajectory — the interaction between the air and the side of the ball that rotates in the opposite direction of the ball movement creates a low-pressure area.

So far, the turbine hasn’t been tested in real life conditions. Prototypes have been installed in Okinawa in July, and Shimizu and his team are currently waiting for a typhoon to strike. They’re one of the few people in the world eagerly waiting it. The video below shows how the turbine works during a benchmark in the lab. 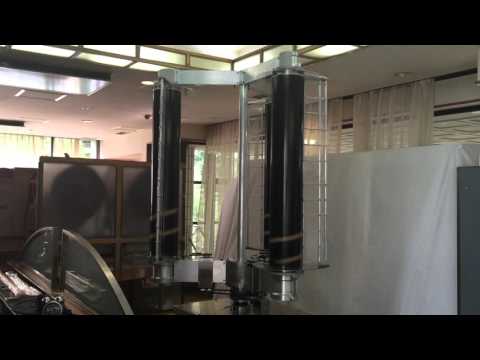 Nevertheless, if it works it would mean a lot for Japan which currently has to import 85% of its energy requirements. Of course, while a typhoon can release a lot of energy that doesn’t mean we can harness all of it — most likely just a fraction of it because there’s no way to store a country’s 50 years worth electricity with current technology.