This could be huge.

by Mihai Andrei
in News, Renewable Energy, World Problems
A A

Clean, safe nuclear energy might be just around the corner.

With a market that’s pushing more and more towards clean, sustainable energy, thorium seems an unlikely candidate. Despite their generally negative reputation, nuclear generators have massive advantages. For starters, they produce low-emissions energy, which could easily be considered clean. It’s also fairly cheap, as generators tend to be long-lived and stable. Lastly — and this is probably the shocker — it’s safe. Sure, things like Chernobyl or Fukushima take the headlines and put a giant scary face around nuclear energy, but fossil fuel is a silent killer. A 2011 study showed that nuclear energy is 4,000 safer than coal plants, despite the general opinion.

But nuclear power does come with its drawbacks. For starters, it generally uses uranium, which is fairly scarce and can be expensive to process. There is also no truly satisfying way to store the nuclear waste and accidents, while very rare, do happen sometimes. Lastly, there’s also the problem of nuclear weapons — the technology to produce nuclear fuel can also be adapted to create weapons, and this makes many people unhappy, for good reasons.

This is where thorium kicks in.

Thorium has long promised to deliver safer nuclear power; only a slightly radioactive element, it’s abundant and widespread. It also produces far less waste and can’t be used to produce nuclear weapons. So why then aren’t we using it? There are two main caveats.

The first one specifically relates to that last point — it can’t be used to produce nuclear weapons. So the US and USSR abandoned research in the 70s. The last thorium reactor was shut down in 1976 and despite some attempts, thorium reactors have mostly remained a fringe idea. Until now. 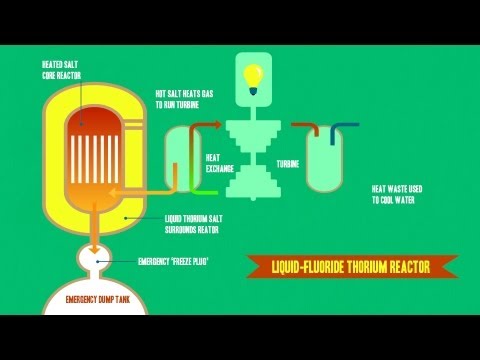 A team at the Nuclear Research and Consultancy Group (NRG) is looking at ways to restart experiments and will fire up a thorium reactor, for the first time in over four decades. The Salt Irradiation Experiment (SALIENT) was launched in collaboration with the EU Commission, with the purposes of assessing the feasibility of a thorium reactor (the reactor is much more complex than a typical uranium reactor).

But remember how we said there are two caveats? The second one refers to thorium being unable to achieve critical mass on its own. You need to either stack it together with uranium or subject it to an outside neutron source to start the reaction cycle. After this is achieved, engineers also need to keep an eye out and monitor how the materials cope with the corrosive high-temperature salt mixture inside the reactor.

Ultimately, they want to develop a stable and scalable (modular) thorium salt reactor. NRG is starting small for now, but thorium reactor research is picking up in the world. China and India are both investing heavily in liquid salt reactors. A US start-up based in Utah also says it’s working on a thorium reactor.