While the world is absorbed in the raging solar storm between America and China, with Europe deciding whether or not to join in the fray, a quiet revolution is happening. It has the potential for real positive impact on the planet and the struggling solar industry at large.

In the last few months, Japan has been proving it really is the ‘Land of the Rising Sun’. Against a backdrop of post-Fukushima energy shortages and debates, it introduced a FiT scheme in July that could see it become the world’s no.2 solar market after Germany. In a dynamic shift away from atomic dependence, the government aims to generate 35% of the country’s energy from renewable sources by 2030.

Even at this early stage, figures show the country has made impressive steps towards meeting its goal. Sales of solar cells rose 72.2% in the year up to April 2012 – and that was before the FiT scheme was introduced.

Bloomberg New Energy Finance estimates that only China will exceed Japan in terms of solar capacity growth. It predicts the country will see at least $9.6 billion in new solar installations, creating 3.2 gigawatts of capacity (equal to the output of three atomic reactors).

About 90% of Japan’s solar panel installation is residential – compared with the US and elsewhere, where capacity is predominantly commercial and utility-scale. To meet growing need since the FiT scheme, panel imports have doubled, while domestic production has also ramped up to meet demand. Large-scale solar parks have opened, or are due to open, all over the country, with new projects announced every day.

The Need for a Nuclear Alternative 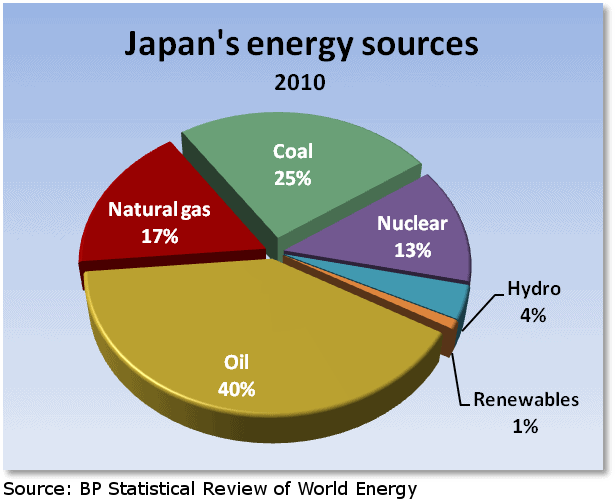 One such project has particular poignancy. Minamisoma City has teamed up with Toshiba to build the country’s biggest solar park. As parts of the city are situated 10 kilometres from the site of 2011’s Fukushima nuclear disaster, areas have been contaminated by radiation. This project offers a stark reminder as to why Japan’s solar eclipse is so important.

After the disaster, all 50 of Japan’s reactors went offline. The first two re-opened in the summer, to prevent potential power shortages, but were met with widespread protest demonstrations. The Nuclear Regulation Authority, set up last month, is compiling new nuclear standards that will underpin the re-opening of more reactors next year. It won’t be clear until then how many plants will meet the new regulations and be allowed to re-start.
Political Hot Potato
The government has legislated for nuclear power to be phased out by 2030. This generous schedule allows companies to recoup their money; in fact, by that date most reactors would be over 40 years old and facing decommissioning anyway. It has made some anti-nuclear campaigners cynical about the move.

The government’s actions are certainly not without subtext; next year’s general election will be weighing heavily on policymakers’ minds. Public opinion polls demonstrate overwhelming consensus for nuclear phase-out, with many ministers supporting the ‘zero option’. But dissenting voices from business and commerce will also shape the direction of the renewables dream.

Solar Resistance
Utility companies, who have the most to lose from a nuclear reduction programme, are resisting the government’s renewable plans. The power companies would be financially devastated by immediate plant closures – if all 50 reactors were closed, losses would total 4.4 trillion yen and make at least four companies insolvent.

But there’s another way in which these companies will suffer. Since Fukushima, private insurance providers will no longer insure the utilities, meaning the government (or rather, the taxpayer) has to foot the bill. In short, utility companies stand to get all the benefits, with none of the risk.

The Keidanren (Japan’s most influential business lobby) warns that the thousands of job losses would not be worth what it sees as problematic, expensive and unreliable energy alternatives. It believes there will be a negative impact on Japan’s economic growth without a stable, affordable alternative to nuclear.

Future’s Bright?
The balance of Japan’s energy portfolio hangs in the political and economic balance, with the government caught between a rock and a hot place – public opinion vs business and economic pressures. Renewable supporters will be celebrating the pictures of busy solar power installers putting up panels all over the country; images of the Fukushima disaster will surely haunt ministers as they closely monitor the progress of the FiT scheme. With elections around the corner and an uncertain world economy all around them – who will they side with?