by Tibi Puiu
in Animals, Discoveries, Environment
Reading Time: 3 mins read
A A
Share on FacebookShare on TwitterSubmit to Reddit 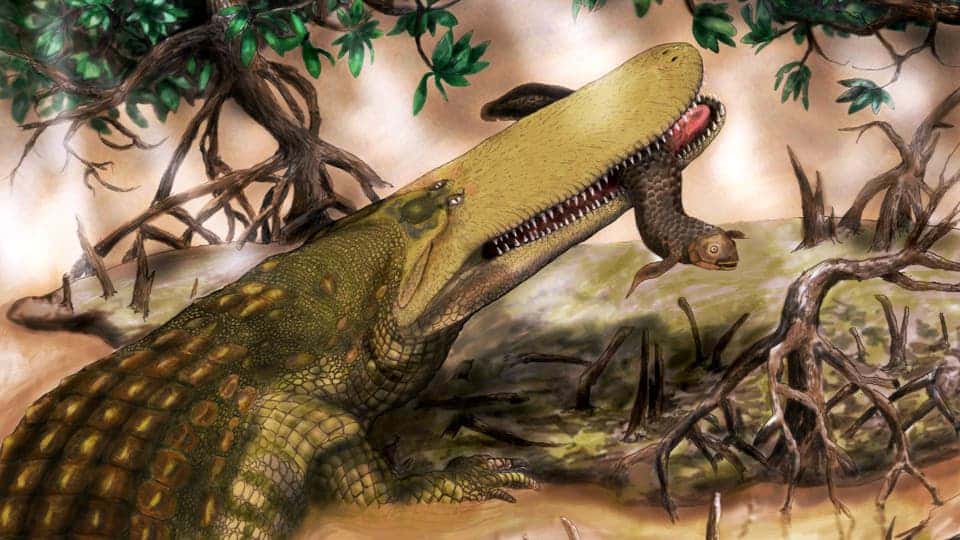 Casey Holliday, a University of Missouri researcher, was looking through some of the hundreds of unlabeled items kept in a storage facility when he come about a remarkable find –  a skull fragment from an ancient croccodile, dating back from the late Cretaceous, around 95 million years ago. What’s really interesting about the find is not only the fact that it was 30 feet long, or that it’s the oldest closest relative to modern day crocodiles; it’s that it had 5 feet long skull, which featured a shield like shape, granting him the nickname “Shiedcroc”. 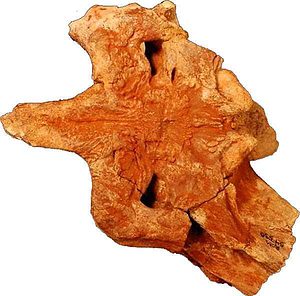 The crocodile, which is part of a previously undescribed species called Aegisuchus witmeri, was first found in Morocco by local fossil diggers. Since the African soil is recognized as an important source of fossils, it’s become an important target zone for researchers, however due to its extensive land mass, it’s been a lot more practical to provide financial incentives for the local populace to dig for fossils. Most of the things they dig up are worthless, some wind up at mineral or rock shows/shops, and a few are deemed valuable enough to be further studied. The skull fragment was dug up years ago, but for some reason it was stacked up in storage facility in the Royal Ontario Museum in Toronto, until Holliday came by and re-discovered it.

Although it was just a fragment of the croc’s massive skull, scientists were able to semi-accurately assess it’s head proportions by performing CAT scans and geometrical analysis, and hence the rest of its buss-sized body. The skull featured bumps and grooves on its roof, which signaled the fact that it was once filled with blood vessels, which would’ve likely delivered blood to a thick, circular, shield-like mound of skin atop the creature’s skull. This is a unique feature, never before seen in any crocodile species, modern or ancient.

The researchers believe, however, that its thick shield-like skin didn’t serve as a defensive weapon, but rather as a show-off feature to impress mates or ward-off predators; a sort of peacocking. The discovery can help scientists learn more about the evolution of crocodiles as well as offer new information about how to protect modern reptilian habitats.

“Understanding the climate of the past, and knowing what we know about climate changes today, it does give us an idea that this type of an ecosystem is a hotbed of diversity, and they are highly susceptible to changes, whether due to the climate, the chemistry of water or carbon dioxide in the air,” Holliday said.

Holliday plans to give the skull chunk back to the Royal Ontario Museum, where it will be put on display later this year.

Holliday plans to give the skull chunk back to the Royal Ontario Museum, where it will be put on display later this year, and of course continue his study of the crocodile’s evolution.

“Researchers are finding a lot of fossils of crocodiles that were terrestrial predatory crocodiles or terrestrial herbivorous crocodiles with adaptations on the teeth to eat plants, as well as all sorts of aquatic crocodiles and fully marine ones,” Holliday said. “These prehistoric fossils tell us that today’s crocodiles are actually kind of boring.”