The French Install Wind Turbines on the Eiffel Tower

One of the world's most iconic and well known monuments - the Eiffel Tower - just got even better: the French authorities have installed two vertical axis wind turbines to power, at least partially, the tower's electrical requirements.

by Mihai Andrei
in Green Living, News
Reading Time: 2 mins read
A A
Share on FacebookShare on TwitterSubmit to Reddit

One of the world’s most iconic and well known monuments – the Eiffel Tower – just got even better: the French authorities have installed two vertical axis wind turbines to power, at least partially, the tower’s electrical requirements.

The Eiffel Tower was initially criticized by some of France’s leading artists and intellectuals for its design, but has become both a global cultural icon of France and one of the most recognizable structures in the world. Almost 7 million people visit it every year, and it received its 250 millionth visitor in 2010. But for all its artistic and touristic merit, the Eiffel tower also sucks up a lot of energy for elevators and lighting – and this is where the wind turbines step in. 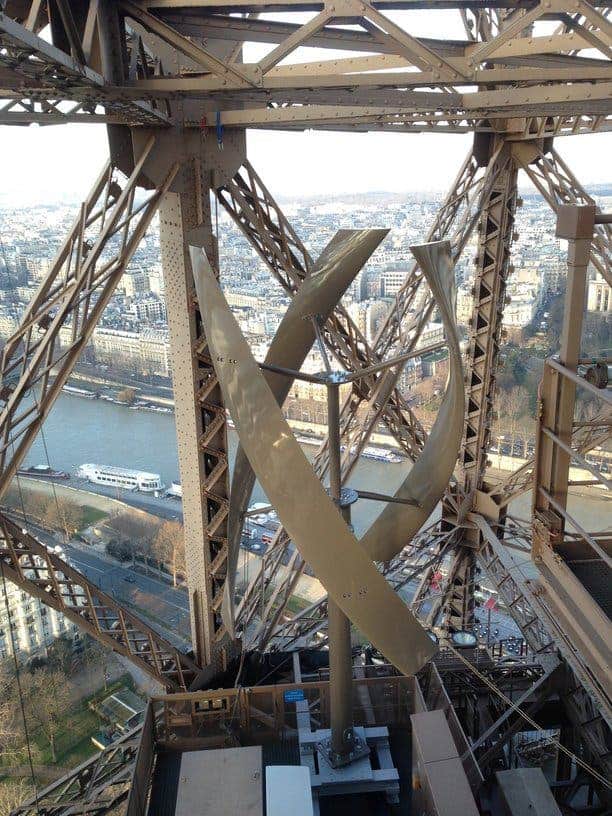 Installed by New York company Urban Green Energy (UGE), the turbines are located above the second floor and are capable of capturing wind from any direction. They will produce 10,000 kWh of electricity per year – enough to power the Eiffel tower’s commercial first floor area. They also look pretty good.

“The Eiffel Tower is arguably the most renowned architectural icon in the world, and we are proud that our advanced technology was chosen as the tower commits to a more sustainable future,” CEO of UGE, Nick Blitterswyk, said in the release. “When visitors from around the world see the wind turbines, we get one step closer to a world powered by clean and reliable renewable energy.”

As part of the same renovation, authorities installed LED lighting and 10 square metres of solar panels on the roof of the first-floor visitor’s area. This solar set-up will heat nearly half of the water used by the two pavilion areas and a rainwater collection system will provide the flushing water from the toilets.

Unfortunately, all these additions won’t provide enough energy to offset the tower’s controversial nightly light show… but the message is clear: Paris is committed to reducing its energy consumption and generating as much green energy as possible – and “greening” up landmarks doesn’t reduce their value. The city aims to have a 25 percent reduction in greenhouse gas emissions and energy consumption, and for 25 percent of energy to come from renewable sources by 2020.