by Tibi Puiu
in Environment
Reading Time: 2 mins read
A A
Share on FacebookShare on TwitterSubmit to Reddit 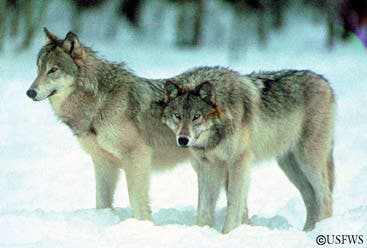 The US Congress may have set an unforgiving precedent after approving the decision to remove the Rocky Mountain gray wolf from the Endangered Species List, marking the first time ever an animal has been cut off the list. The decision came after important Federal cuts were announced, in which Majority Leader Harry Reid and President Barack Obama stood firm against Republican attempts to repeal clean air and clean water protection, however the wolves were compromised.

“The Environmental Protection Agency was cut by $1.6 billion, a 16-percent reduction, and lawmakers from Western states were able to include a rider allowing states to de-list wolves from the endangered species list,” explains Brian Merchant, about Friday’s decision.

The management of the gray wolves is now in the hands of both Montana and Idaho. Though, just last week a, federal judge bucked this idea because he felt it would actually increase commercial wolf hunts within those states.

In the Northern Rockies the gray wolves balance nature in the area by keeping elk and deer herds healthy. The decision will most likely lead to increase poaching, which in term affect the whole ecosystem, but the worst part of the Congress cut is that it sets a precedent. Now that it’s been overlooked, there’s nothing to stop other species from falling off the list.

“In all the decades of the Endangered Species Act, Congress has never legislatively removed protections for any species. It’s bad to do it for the wolf, and it could set a very bad precedent, replacing scientific determinations with politics” – Defenders of Wildlife president Rodger Schlickheisen told The New York Times

Who now remembers the 2008 presidential campaign when Defenders of Wildlife ran a hard-hitting ad attacking Sarah Palin for her support of aerial hunting of wolves? It was one of the most emotionally hitting campaigns of 2008, out ranking any other election campaign ads from the time according to statistics, and in this case something similar might be made to create awareness.

You can tell Congress to remove the outrageous wolf-delisting rider from the 2011 budget here , as part of an initiative started by the same Defenders of Wildlife.