The Upper Las Vegas Wash region is sprawling with fossils from diverse geological eras be it the Cretaceous or the  Late Pleistocene. From the latter age, more precisely since the last ice age some 10,000 years ago, a dire wolf fossil was dated and identified. This is the first piece of evidence that the now extinct ice age wolf once roamed Nevada, which at the time was a spring-fed, swampy area.

“The Tule Springs area has turned up many species, but it’s exciting to fill in another part of the map for this animal and reveal a bit more about the ice age ecosystem in Southern Nevada,” Bonde said. 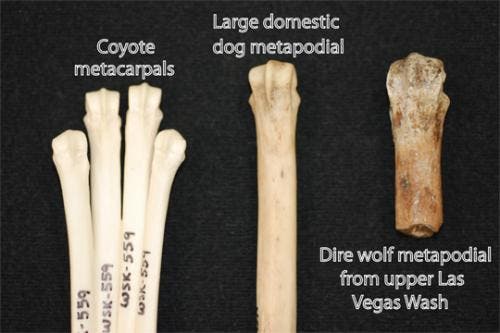 The dire wolf, a much larger relative of the gray wolf, is believed to have been spread out across much of North America for more than a million years, before it became extinct once with the passing of the last ice age, some 10,000 years ago. The fossil in question has been estimated to be between 10,000 and 15,000 years old, according to the Los Angeles County Museum of Natural History‘s Xiaoming Wang, an expert on extinct species of the dog family.

“This discovery helps flesh out Southern Nevada’s Pleistocene ecosystem and shows that there are still important discoveries to be made in the Upper Las Vegas Wash,” said UNLV geology professor Steve Rowland, who collaborates with Bonde in studying southern Nevada ice age fossils. “To understand why certain species became extinct and others did not, we need to learn as much as possible about predatory habits and which species were especially sensitive to changes in the environment.”

The announcement comes on the heels of a recent discovery in the same wash of a saber-tooth cat by researchers from the San Bernardino County Museum. Like dire wolves, saber-tooth cats were Pleistocene predators that had been conspicuously absent from the Southern Nevada fossil record.