by Mihai Andrei
in Biology, Environmental Issues, Home science, Oceanography
A A 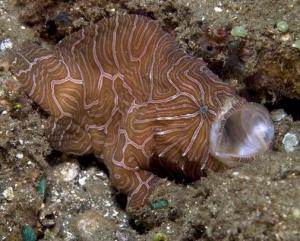 A University of Washington fish expert claims to have discovered a whole new species of fish, that would rather crawl into crevices than swim, and that may be able to see in the same way that humans do. Well this is certainly something unexpected, and there is no species that does the same kind of thing, and there were no reasons to believe that such a fish would exist. Something’s definitely fishy here.

The creature was sighted in Indonesian waters just off Ambon Island. Although it has tan- and peach-colored zebra-striping, and rippling folds of skin that obscure its fins, it’s quite soft and slippery enough to slide through the tight crevices of coral reefs. This is probably why they are so elusive and haven’t been spotted.

The individuals are undoubtedly anglerfishes, says Ted Pietsch, a UW professor of aquatic and fishery sciences who has published 150 scholarly articles and several books on anglerfishes and is the world’s leading authority on them. A new species of fish may seem like not such a big deal, but the thing is that in the past half century scientists have found just 5 new species, so finding a new one, especially one as surprising as this one has its importance.

“Several times I saw these fish work themselves through an opening that seemed much smaller than the fish, sometimes taking a minute or more to get all the way through,” says David Hall, an underwater natural history photographer who was able to dive with Maluku Divers and take additional photos of the new find. “They must have pretty tough skin to keep from being scraped and cut, but there is no evidence of superficial injury or scars in my photographs.”