by Mihai Andrei
in Animals, Environmental Issues
A A

Islands are especially threatened by rising sea levels, and this study conducted on the Hawaiian islands offers the most detailed and multifaceted assessment available of how island biodiversity may be affected by climate change. Recent models agree for an average rise of approximately 1 meter in global sea level by 2100, with larger increases possible in parts of the Pacific Ocean. This may not seem like much, but it’s actually more than enough to seriously endanger the ecosystems in the coastal areas.

The Hawaiian islands, for example, a World Heritage Site and part of the Papahānaumokuākea Marine National Monument, support the largest tropical seabird rookery (a colony of breeding animals) in the world, with 21 species of sea birds, 4 endemic land bird species and many other migratory or land species.

“These magnificent seabirds spend the majority of their adult lives at sea: soaring vast distances over open water searching for food in an over-fished ocean. The one thing they cannot do at sea is reproduce,” said USGS Director Marcia McNutt. “And now their breeding ground is in peril.”

The USGS study was led by biologist Michelle H. Reynolds of the USGS Pacific Island Ecosystems Research Center and used an accepted temperature rise of 1.8–2.6 degrees Celsius and an annual decrease in rainfall of 24.7–76.3 millimeters by 2100 for the study. Applying these parameters and collecting new, high resolution topographic data modeled sea-level rise inundation, habitat loss, and calculated wildlife vulnerability. 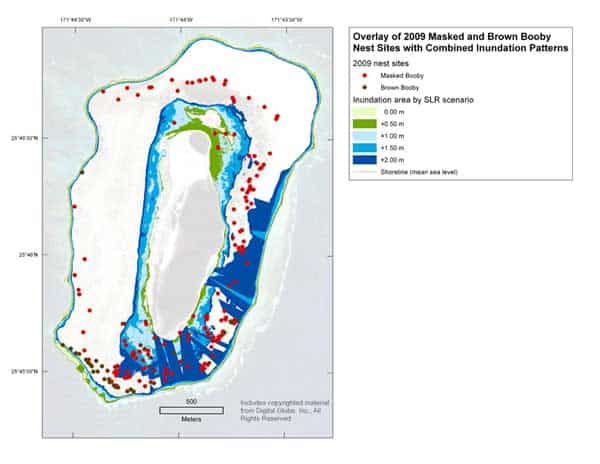 So, given a passive sea level rise of 1 meter, 4 percent of landmass in the Hawaiian islands would be lost; however, if the water rises by 2 meters, 26 percent of the land mass will be lost – quite a difference. In terms of other effects, impacts from storm waves as well as groundwater rise were found to greatly amplify the effects of sea-level rise: from 4.6 percent to 17.2 percent inundation in the 2-meter scenario, for instance. As a result, habitat loss would be most dramatic in the wave-exposed coastal habitats and most devastating to species with global breeding distributions primarily on the low-lying Northwestern Hawaiian Islands.

At the moment, there is no clear strategy for protecting these environments, but studying their future and the impact we, as a society have on them, is the first step in this direction.