Scientists examine over 1,000 chemicals from fracking fluids: many linked to reproductive or development toxicity

The indispensable chemical mixture that allows the industry to fracture rock and release the gas trapped inside looks almost like a black box. More than 1,000 chemicals are used in the fracking fluid, but a paper published in the Journal of Exposure Science and Environmental Epidemiology found toxicity information was lacking for 76% of them. In other words, these could be harmless or dangerous. There's no way to know at this point. Concerning the rest -- about 240 substances -- the researchers found evidence that suggests reproductive toxicity for 103 (43%), developmental toxicity for 95 (40%), and both for 41 (17%).

The indispensable chemical mixture that allows the industry to fracture rock and release the gas trapped inside is basically a black box. More than 1,000 chemicals are used in the fracking fluid, but a paper published in the Journal of Exposure Science and Environmental Epidemiology found toxicity information was lacking for 76% of them. In other words, these could be harmless or dangerous. there’s no way to know at this point. Concerning the rest — about 240 substances — the researchers found evidence that  suggests reproductive toxicity for 103 (43%), developmental toxicity for 95 (40%), and both for 41 (17%).

Substances mentioned in the study include arsenic, benzene, cadmium, lead, formaldehyde, chlorine, and mercury. Of the 240 analyzed substances, 67 were particularly worrisome since these had an existing federal health-based standard or guideline. Like all hazardous chemicals, it’s the dose that matters. In the right concentration, a usually toxic chemical can be harmless. The researchers from Yale University say data on whether levels of chemicals exceeded the guidelines were too limited to assess.

“This evaluation is a first step to prioritize the vast array of potential environmental contaminants from hydraulic fracturing for future exposure and health studies,” said Nicole Deziel, senior author and assistant professor of public health. “Quantification of the potential exposure to these chemicals, such as by monitoring drinking water in people’s homes, is vital for understanding the public health impact of hydraulic fracturing.”

“We focused on reproductive and developmental toxicity because these effects may be early indicators of environmental hazards. Gaps in our knowledge highlight the need to improve our understanding of the potential adverse effects associated with these compounds,” said Elise Elliott, a public health doctoral student and the paper’s first author.

Fracking chemicals: a black box. Most drillers are not mandated to disclose the chemical makeup of fracking fluid, being treated as trade secrets.

According to Preserve the Beartooth Front, these findings from Yale echo previous research that found associations between proximity to hydraulic fracturing sites and reproductive and developmental problems. These include:

Earlier this year, the  U.S. Environmental Protection Agency (EPA) released a report in which it analyzed more than 39,000 FracFocus disclosures in the last two years.  The report found that the median number of chemical additives per fracking job was 14. Hydrochloric acid, methanol, and hydrotreated light petroleum distillates were the most common additives, being reported in 65 percent of all disclosures. Even in low doses, these are known to cause skin irritation, chemical burns, headaches and blurred vision.

In the past ten years, America has lived through what experts herald as the “shale boom” – a massive development of hydraulic fracturing wells to the point that today the U.S. has become the #1 crude oil and natural gas producer in the world. Nine out of ten wells in the U.S. are now fracking wells. 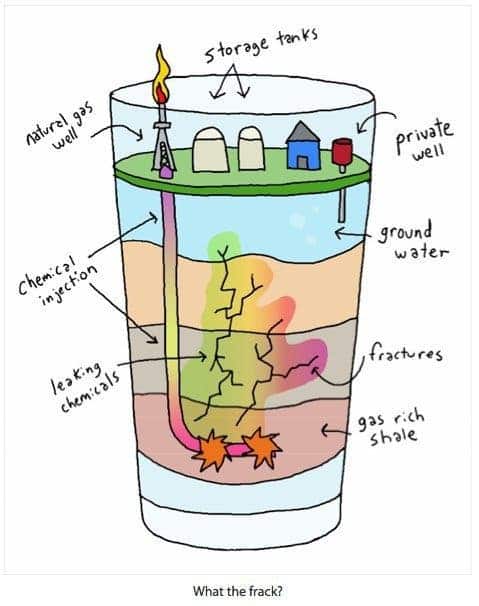 Essentially, hydraulic fracking wells pump a mixture of chemicals, sand and water some 2 miles deep into the ground. The pressure breaks down rock and releases the hydrocarbons previously trapped for millions of years.

While fracking gave the U.S. a huge leverage, both economical and tactical, critics have voiced a number of valid concerns. These include air pollution, huge amounts of wastewater, bedrock fracturing that leads to earthquakes, and — maybe most worrisome — the potential for groundwater and aquifer contamination with hazardous chemicals. There are many other concerns, as well.

Researchers at University of Texas at Arlington conducted tests on more than 100 water wells in Texas and found 30% of these contained ‘alarming’ amounts of arsenic, enough to be considered carcinogenic and seriously threatening human health. These contaminated wells were found in the vicinity of known fracking sites and prior to drilling these were found to be free of arsenic or at least far from the concentrations we’re seeing now.

Today, however, there is no evidence that might directly link fracking to contaminated water, even though many people can now light their tap water on fire after fracking wells were developed in their vicinity. When Stanford researchers traced back methane leaks from contaminated drinking water in Pennsylvania and Texas to shale gas wells, they did not find a link between the contamination and the technique used to drill for shale gas itself. Instead, the researchers concluded that well integrity is the main driver for the contamination.

With good and bad, we need more long-term research on the matter to establish whether or not fracking is worth it. Frack now, ask questions later is not a wise course of action.