by Mihai Andrei
in Environmental Issues, Other

The point was to make a terrarium, connect it with some other enclosures, and seal the whole thing airtight. Then you make giant greenhouses and ask people to live there, using only the resources they have inside. It’s a fantastic idea, and looks absolutely awesome, but it never worked. The whole thing was done kind of amateurish, actually extremely amateurish, considering the 200 million investment.

The whole point was to simulate how things could work in a long interstellar travel, or with other possibly inhabitable planets without a biosphere – hence the name Biosphere 2, since Earth’s biosphere is the only one we know so far. People signed up and lived for a couple of years in the terrarium, but now, 20 years after it was built, the only inhabitants are “cockroaches, nematodes, snails, crazy ants and assorted fish”. But the tide may be changing for Biosphere 2, as researchers intend to start a new chapter for it, building the first of three enclosed soil slopes in what was once the “intensive agricultural biome,” the space where Poynter and the other original “biospherians” grew the rice, sorghum, peanuts, bananas, papayas, sweet potatoes and lablab beans that supplied 90 percent of their nutritional needs.

It’s a 10 year, 5$ million dollar project, which will help scientists understand how vegetation, topography and other factors affect rainwater’s journey through a watershed and into our drinking supplies, among others. The good thing is that it could be even more relevant today than it was 20 years ago, because we have a better understanding of the surrounding environment, and the idea of building such conditions inside a space ship seem feasible, although far away.

“What makes me really happy is that it really does capture a lot of what we were trying to do in the early years of Biosphere 2,” says Poynter, who founded an aerospace company with husband and fellow biospherian Taber MacCallum. “I mean, they’re doing some world-class science. They really have the vision of the place. They understand what it was intended for in many ways.”

Located about 30 miles northeast of Tucson in the foothills of the Santa Catalina Mountains, Biosphere 2 stands out as a modern and futuristic greenhouse, and it has 5 different ecosystems: mangrove wetland, tropical rain forest, savanna grassland, coastal fog desert, and a 600,000-gallon “ocean” with its own wave-lapped sand beach and living coral reef; almost 400 different species inhabitted the Biosphere.

Being ahead of your time has disadvantages

The first try was a fail because oxygen levels dropped significantly, and an oxygen injection was needed to maintain the area habitable.

“The chemistry of the atmosphere was all whacked out,” says Joaquin Ruiz, dean of UA’s College of Science. “Tonight Show” host Jay Leno, who made B2 a running gag, had an explanation. “Any kid’ll tell you you can’t keep eight scientists in a giant mayonnaise jar unless you put holes in the top of the thing.” 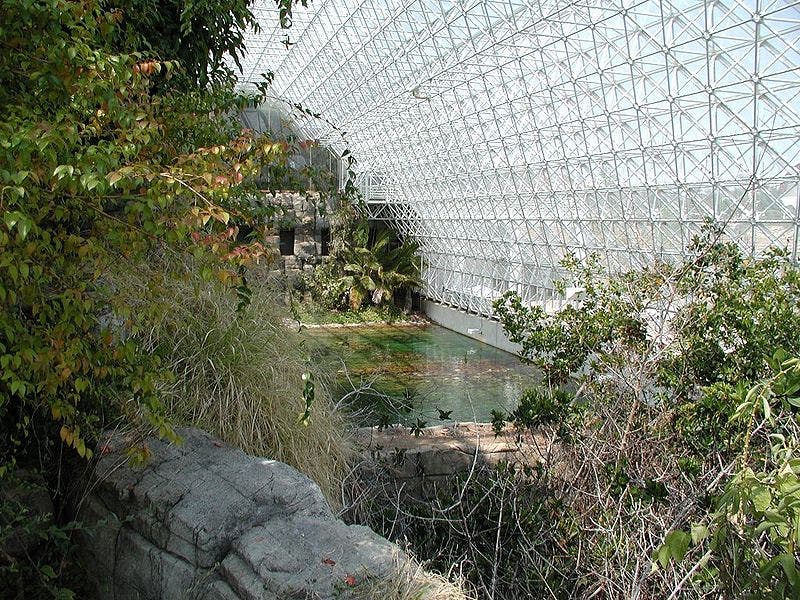 Still, regardless of the numerous setbacks they faced, what they built was indeed something amazing, maybe too ahead of its time Jane. Poynter, member of the original crew adds:

“I just am so SICK of that sort of snarky way that a lot of people talk about the Biosphere in its early years,” says Poynter, who still visits B2 often and sometimes leads tours. “The fact is that we built this unbelievable place that no one had ever done before. … We were a very forward-thinking, very unusual group of people – pulled off an unbelievable feat. But, somehow, the unbelievable feat gets lost in the rest of the story.”