I don’t know about you but I’m not big on plastic cups. Or plates. Or cutlery, for that matter. Even if they’re not the 2 cent-a-dozen variety that manage to break even when confronted with a salad, I just don’t like how food and drink from plastic containers tastes. Their main selling point is that they’re dine-and-forget. And, as there’s not one person alive excited to do the dishes, it’s a pretty strong sales pitch. But this only means that we’re throwing away an absurd amount of these things, some 7 million tonnes of plastic yearly from the USA alone, EPA estimates.

And I’d much rather eat my own plate than leave it laying around in a landfill for millions of years.

Narayana Peesapaty, founder of Bakeys, seems to feel the same way as I do on this topic. He was appalled to see India’s diners throw away an estimated 120 billion plastic utensils each year. But instead of just writing about it, he actually started doing something about it — a very delicious something. Peesapaty developed a new type of single use spoon, one that you can eat after your meal.

Made of millet, rice and wheat, Bakeys edible spoons are designed to last for up to 20 minutes in hot liquids, and come in several flavors: ginger-cinnamon, ginger-garlic, cumin, celery, black pepper, mint-ginger, and carrot-beet. There’s also a sugar-only option if you’re not looking to spice up your meal. They’re completely vegan-friendly too, if that’s your thing. Ironically, this spoon might be the healthiest part of your meal if you’re living in the United States. 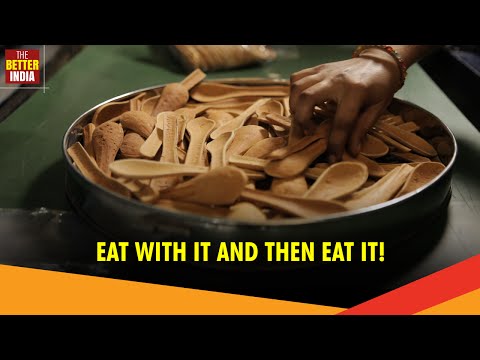 And come on, a spoon that you can eat with your food? How awesome an idea is that?! No wonder then that they’re a huge success — Bakey has already sold more than 1.5 million spoons. Peepsapaty launched a Kickstarter campaign to expand the brand worldwide which received overwhelming support. From a 20,000$ goal, they raised more than $106,000 as of writing this article. And there’s more than two weeks to go.

Because Bakey is already manufacturing the spoons for sale in India, the company is promising a reward of 100 spoons in the flavor of your choice for every pledge of $10. The funds will go toward expanding current operations and increasing production. A new facility is already under construction that will turn out more than 800,000 of the edible spoons each day and the company plans to expand to other utensils within a few months.

While the spoons are a great alternative for domestic use, Peesapaty says he’s really after large commercial customers, where his tasty ustensils can really make a dent in worldwide plastic waste.